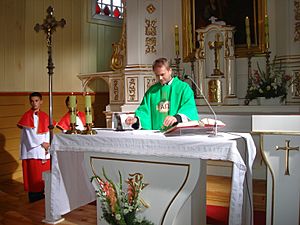 Roman Catholic while celebrating a mass

A priest or priestess is a person who is allowed to do religious rites. Their office or position is the priesthood, a word which can also be used for such persons collectively. In most religions and cultures in history there have been priests, although they have a lot of different names, and follow different rules. 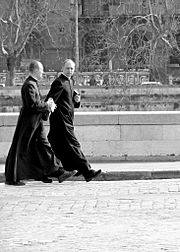 A priest is a member of a church that has been told to look after his (spiritual) community. He is the head of a parish.

To become a Catholic priest, you are required to study Theology. The Orthodox and Protestant Churches also have laymen as clergy.

Catholic priests are not allowed to marry meaning that they have to be celibate. Orthodox priests can be married, but they must not marry after they become a priest. Anglican priests can get married before or during the time they are a priest.

Higher priests are called Bishops and Archbishops in the Anglican Church. John Sentamua and Rowan Williams are the archbishops of York and Canterbury. In some denominations only men can become priests.

Many Protestant churches have ministers or pastors instead of priests.

In Japan there are Buddhist priests and nuns, Shinto priests and priestesses as well as clergy in the Christian traditions.

All content from Kiddle encyclopedia articles (including the article images and facts) can be freely used under Attribution-ShareAlike license, unless stated otherwise. Cite this article:
Priest Facts for Kids. Kiddle Encyclopedia.