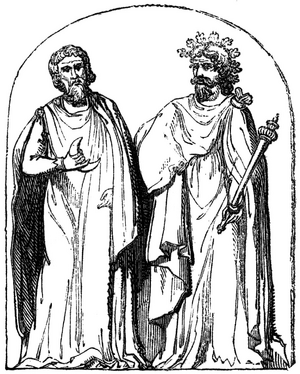 Two druids, from an 1845 publication, based on a bas-relief found at Autun, France.

A druid was a member of the priestly and learned class in the pre-Christian, ancient Celtic societies. These societies existed through much of Western Europe, Britain and Ireland, until the Roman government took over and, later, Christianity arrived. Druids were part of the cultures of the tribal peoples who were called "Keltoi" (Κέλτοι) or "Keltai" (Κέλται) and "Galatai" (Γαλάται) by the Greeks and "Celtae" and "Galli" by the Romans. In the communities they served, druids combined the duties of priest, arbitrator, healer, scholar, and magistrate. Both men and women served as druids, although there is no early proof for female druids, or druidesses.

From what little we know of late druidic practices, it appears deeply traditional and conservative, in the sense that druids were conserving the old culture and lore for their communities. It is impossible now to judge whether this continuity had deep historical roots and originated in the social transformations of the late La Tène culture, or whether there had been a discontinuity and then a religious innovation.

Greek and Roman writers on the Celts commonly made at least passing reference to druids, though before Caesar's report merely as "barbarian philosophers"; They were not concerned with ethnology or comparative religion and consequently our historical knowledge of druids is very limited. Druidic lore consisted of a large number of verses learned by heart, and Caesar remarked that twenty years were required to complete the course of study.

Druidic culture are believed to be practicers of rituals and such magic, Druids were believed to be a neutral people they were known as Druid(ae) similar to priests and scholars believed to have studied rituals of Human sacrifice and Familiars (Known currently as a form of a pet from a practicer; Witch, Druidae, Warlock). The Druidic culture was believed to have some form of religious complication. Druids are known to have practiced such as reincarnation as animals of worship (Bird, Lion, Tiger, Cat, Monkey), but such cannot be proved as what we know so far. They were said to have lived in Roman times in Great Britain and Ireland it is said that they have some form of connection to stonehenge and other monuments.

All content from Kiddle encyclopedia articles (including the article images and facts) can be freely used under Attribution-ShareAlike license, unless stated otherwise. Cite this article:
Druid Facts for Kids. Kiddle Encyclopedia.