Kids Encyclopedia Facts
This page is about the Irish province. For the German city, see Münster. For the town in the United States, see Munster, Indiana. For other uses, see Munster (disambiguation).

Munster (Irish: an Mhumhain / Cúige Mumhan) is one of the provinces of Ireland situated in the south of Ireland. In early Ireland, it was one of the "fifths" ruled by a "king of over-kings" Irish: rí ruirech. Following the Norman invasion of Ireland, the ancient kingdoms were shired into counties for administrative and judicial purposes. In later centuries, local government legislation has seen further sub-division of the historic counties.

Munster has no official function for local government purposes. For the purposes of the ISO, the province is listed as one of the provincial sub-divisions of the State (ISO 3166-2:IE) and coded as "IE-M". Geographically, Munster covers a total area of 24,675 km2 (9,527 sq mi) and has a population of 1,246,088 with the most populated city being Cork. Other significant urban centres in the province include Limerick and Waterford. 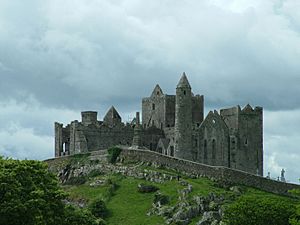 The Rock of Cashel, Co. Tipperary, historical seat of the Kings of Munster

In the early centuries AD, Munster was the domain of the Iverni peoples and the Clanna Dedad familial line, led by Cú Roí and to whom the king Conaire Mór also belonged. In the 5th century, Saint Patrick spent several years in the area and founded Christian churches and ordained priests. During the Early Middle Ages, most of the area was part of the Kingdom of Munster, ruled by the Eóganachta dynasty. Prior to this, the area was ruled by the Dáirine and Corcu Loígde overlords from the early 7th century onwards, perhaps beginning with the career of Faílbe Flann mac Áedo Duib. Later rulers from the Eóganachta who would dominate a greater part of Ireland were Cathal mac Finguine and Feidlimid mac Cremthanin. Notable regional kingdoms and lordships of Early Medieval Munster were Iarmuman (West Munster), Osraige (Ossory), Uí Liatháin, Uí Fidgenti, Éile, Múscraige, Ciarraige Luachra, Corcu Duibne, Corcu Baiscinn, and Déisi Muman. By the 9th century the Gaels had been joined by Norse Vikings who founded towns such as Cork, Waterford and Limerick, for the most part incorporated into a maritime empire by the Dynasty of Ivar, who periodically would threaten Munster with conquest in the next century. Around this period Ossory broke away from Munster. The 10th century saw the rise of the Dalcassian clan, who had earlier annexed Thomond, north of the River Shannon to Munster. Their leaders were the ancestors of the O'Brien dynasty and spawned Brian Boru, perhaps the most noted High King of Ireland, and several of whose descendants were also High Kings.

There was Norman influence from the 14th century, including by the FitzGerald, de Clare and Butler houses, two of whom carved out earldoms within the Lordship of Ireland, the Earls of Desmond eventually becoming independent potentates, while the Earls of Ormond remained closer to England. The O'Brien of Thomond and MacCarthy of Desmond surrendered and regranted sovereignty to the Tudors in 1543 and 1565, joining the Kingdom of Ireland. The impactful Desmond Rebellions, led by the FitzGeralds, soon followed.

By the mid-19th century much of the area was hit hard in the Great Famine, especially the west. The province was affected by events in the Irish War of Independence in the early 20th century, and there was a brief Munster Republic during the Irish Civil War.

Noted for its traditions in Irish folk music, and with many ancient castles and monasteries in the province, Munster is a tourist destination. During the fifth century, St. Patrick spent seven years founding churches and ordaining priests in Munster, but a fifth century bishop named Ailbe is the patron saint of Munster.

In Irish mythology, a number of pagan goddesses are associated with the province including Anann, Áine, Grian, Clíodhna, Aimend, Mór Muman, Bébinn, Aibell and Queen Mongfind. Each is historically associated with certain septs of the nobility. The druid-god of Munster is Mug Ruith.

The province has long had trading and cultural links with continental Europe. The tribe of Corcu Loígde had a trading fleet active along the French Atlantic coast, as far south as Gascony, importing wine to Munster. The Eóganachta had ecclesiastical ties with Germany, which show in the architecture of their ceremonial capital at the Rock of Cashel.

The majority of Irish ogham inscriptions are found in Munster, principally in areas occupied by the Iverni, especially the Corcu Duibne. Later, Europe's first linguistic dictionary in any non-Classical language, the Sanas Cormaic, was compiled by Munster scholars, traditionally thought to have been directed by the king-bishop Cormac mac Cuilennáin (d. 908).

The School of Ross in Munster was one of Europe's leading centres of learning in the Early Middle Ages.

Several sports in Munster are organised on a provincial basis, or operate competitions along provincial lines. This includes traditionally popular sports such as hurling, Gaelic football, rugby union and soccer, as well as cricket (Munster Cricket Union), hockey (Munster Hockey Union), and others.

Traditionally, the dominant teams in Munster football are Kerry GAA and Cork GAA, although Tipperary GAA and Limerick GAA have also won All-Ireland Senior Football Championships. Kerry in particular are the most successful county in the history of football. 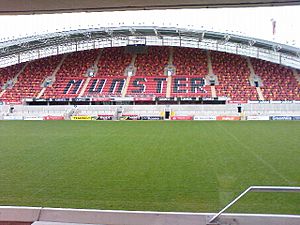 Thomond Park in Limerick - one of two venues in the province which host Munster Rugby games
Main page: Munster Rugby

Rugby is a popular game in the cities of Limerick and Cork. Munster Rugby is an Irish Rugby Football Union representative side which competes in the Pro12 competition, winning in 2003, 2009 and 2011 and in the Heineken Cup, winning in 2006 and 2008. Until 2016, the Munster side was the only Irish side to have defeated the New Zealand All Blacks.

Association football is also a popular game in Munster, with the Munster Football Association governing a number of aspects of the game in the province. Four Munster clubs play in the Airtricity League of Ireland; Cork City F.C. and Limerick FC in the League of Ireland Premier Division and Waterford United & Cobh Ramblers in the Irish First Division.

The province includes nine local government structures, made up of six counties and three cities:

Munster has many large towns (including a number of growing satellite towns) and is the province with the most cites in the Republic of Ireland. 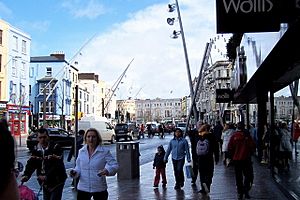 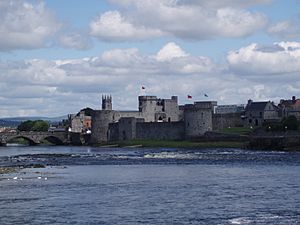 See also: List of urban areas in the Republic of Ireland by population

All content from Kiddle encyclopedia articles (including the article images and facts) can be freely used under Attribution-ShareAlike license, unless stated otherwise. Cite this article:
Munster Facts for Kids. Kiddle Encyclopedia.