Kinsale ( Irish: Cionn tSáile, meaning head of the brine) is a historic port and fishing town in County Cork, Ireland. Located approximately 25 km (16 mi) south of Cork City on the southeast coast near the Old Head of Kinsale, it sits at the mouth of the River Bandon, and has a population of 5,281 (as of the 2016 census) which increases in the summer when tourism peaks.

Kinsale is a holiday destination for both Irish and overseas tourists. Leisure activities include yachting, sea angling, and golf. The town also has several art galleries, Ireland's only meadery, and a large yachting marina close to the town centre.

The town is known for its restaurants, including the Michelin-starred Bastion restaurant, and holds a number of annual gourmet food festivals.

As a historically strategic port town, Kinsale's notable buildings include Desmond Castle (associated with the Earls of Desmond and also known as the French Prison) of c. 1500, the 17th-century pentagonal bastion fort of James Fort on Castlepark peninsula, and Charles Fort, a partly restored star fort of 1677 in nearby Summercove. Other historic buildings include the Church of St Multose, (Church of Ireland) of 1190, St. John the Baptist (Catholic) of 1839, and the Market House of c. 1600. Kinsale is in the Cork South-West (Dáil Éireann) constituency, which has three seats. 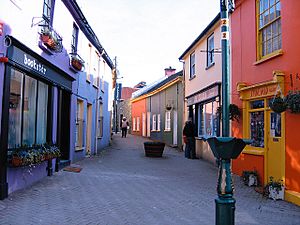 Kinsale is known for its historic streetscape and brightly coloured shops.

In 1333, under a charter granted by King Edward III of England, the Corporation of Kinsale was established to undertake local government in the town. The corporation existed for over 500 years until the passing of the Municipal Corporations (Ireland) Act 1840, when local government in Kinsale was transferred to the Town Commissioners who had been elected in the town since 1828. These Town Commissioners became the Kinsale Council under the Local Government (Ireland) Act 1898 and the Kinsale Town Council existed until 2014 when this layer of local government was abolished in Ireland as part of measures to reduce Ireland's budget deficit following the financial crisis of 2008-2010 (see Post-2008 Irish economic downturn). It returned two members to the Irish House of Commons prior to its abolition in 1800.

In its history, Kinsale has also important occasional links with Spain. In 1518 Archduke Ferdinand, later Emperor Ferdinand I, paid an unscheduled visit to the town, during which one of his staff wrote a remarkable account of its inhabitants. In 1601 a Spanish military expedition - the last of the Armadas - landed in Kinsale. As a result, the battle of Kinsale took place at the end of the Nine Years War in which English forces led by Charles Blount, 8th Baron Mountjoy defeated a rebel Irish force, led by the princes Hugh Roe O'Donnell and Hugh O'Neill, which was allied with forces of the Spanish empire of Philip III of Spain and Portugal. Following this battle the Flight of the Earls occurred in which a number of the native Irish aristocrats, including the Earls of Tyrone and Tir Conaill, abandoned their lands and fled to mainland Europe. Shortly after the battle, James's Fort was built to protect the harbour.

In 1649 Prince Rupert of the Rhine declared Charles II king of England, Scotland and Ireland at St Multose Church in Kinsale upon hearing of the execution of Charles I in London by Parliamentarian forces during the English Civil War.

Charles Fort, located at Summer Cove and dating from 1677 in the reign of Charles II, is a bastion-fort that guards the entrance to Kinsale harbour. It was built to protect the area and specifically the harbour from use by the French and Spanish in the event of a landing in Ireland. James's Fort, which dates from the reign of James I, is located on the other side of the cove, on the Castlepark peninsula. An underwater chain used to be strung between the two forts across the harbour mouth during times of war to scuttle enemy shipping by ripping the bottoms out of incoming vessels.

King James II of England and Ireland (James VII of Scotland) landed at Kinsale in March 1689 with a force of 2,500 men, raised with the support of King Louis XIV, as part of his campaign to regain power in England, Scotland and Ireland. In 1690, James II of England returned to exile in France from Kinsale, following his defeat at the Battle of the Boyne by William III of England (also Stadtholder William III of the House of Orange-Nassau) after the Glorious Revolution (or Revolution of 1688) in England against the background of wars involving France under King Louis XIV.

From 1694 Kinsale served as a supply base for Royal Navy vessels in southern Ireland, and a number of storehouses were built; it was limited to smaller vessels, however, due to the sandbar at the mouth of the river. English navigator and privateer Captain Woodes Roger mentions Kinsale in the memoir of his 1708 expedition from Cork; in particular he mentions a pair of rocks known as 'the Sovereigne's Bollacks' on which his ship almost ran aground. Kinsale's naval significance declined after the Royal Navy moved its victualling centre from Kinsale to Cork harbour in 1805 during the Napoleonic Wars in the period of France's First Empire.

When the ocean liner RMS Lusitania was sunk by a U-boat of the German Empire on 7 May 1915 on a voyage from New York City to Liverpool during the First World War, some of the bodies and survivors were brought to Kinsale and the subsequent inquest on the bodies recovered was held in the town's courthouse. A statue in the harbour commemorates the effort. The Lusitania memorial is at Casement Square in Cobh, to the east of Cork city.

Kinsale was linked to the Irish railway system of the Cork, Bandon and South Coast Railway and its successors from 1863 until 1931, when it was closed by the Great Southern Railways during a low point in Kinsale's economic fortunes. The station, inconveniently located for the town and harbour, was on Barrack Hill and the line ran to a junction at Crossbarry on the Cork (Albert Quay) to Bandon line.

Bus Éireann provides Kinsale's primary means of public transport. Buses regularly operate from Kinsale to Cork City, with most of these stopping at Cork Airport on the way. Kinsale and Bandon are linked by public transport with a bus service provided by East Cork Rural Transport.

The Archdeacon Duggan Bridge on the R600 road to the south-west of the town was opened in March 1977, named after Father Tom Duggan MC OBE and latterly a staunch nationalist and a missionary priest in Peru. This bridge replaced an older cast iron structure of the early 1880s which was located approximately 3 km (1.9 mi) upstream on the River Bandon, near Tisaxon More.

Kinsale is the first Transition Town in Ireland. It is a community-based group, supported by Kinsale town council. It looks for sustainable solutions to the challenges of peak oil and climate change. Public meetings are held on the third Thursday of every month. It has taken much guidance from the Kinsale Energy Descent Action Plan 2021, which has spawned further Transition Towns worldwide.

The largest planned development, of 2.9 ha, near the historic centre is the restarted Convent Garden scheme promoted by Cumnor Construction since the early 2000s (Cork County Council planning application 04/53026). This involves a combination of conversion of the austere grey rendered concrete former St Josephs Convent of the Sisters of Mercy on Ramparts Lane into 79 apartments and building in the grounds 94 new build houses, with 295 car spaces, according to the Bord Pleanala inspector's report of 2005. After several years of inactivity, work on building the new units recommenced in 2015.

For a period in 2007-9, a circa 18,000 sqm hotel, apartment and retail development was promoted by Fuschia Investments Limited, a company linked to Howard Holdings plc for the prominent site near the tourist office between Pier Road and Long Quay (Planning Register Reference Number: 04/53030), vacant since the (early?) 1980s and once the site of a Henry Good warehouse (and up to 1922 an RIC barracks). Scott Tallon Walker Architects undertook a design study for the development <http://www.stwarchitects.com/project-information.php?p=04098&t=i>. However, by 2011 the site had reverted to its use as a surface car park. The potential scheme now appears to be controlled by Clowater Asset Management Limited, of Cork.

Abbey Fort is a development of 260 units by Dunboy Construction.http://www.dunboyconstruction.com/docs/abbey-fort.pdf/, at the north end of Kinsale, in which initial phases were completed in 2007-12. Part of the 22 acres of the site at Abbey Fort was sold by the National Asset Management Agency to Cairn Homes and Lone Star in December 2015 as part of the Ulster Bank Project Clear sale. Further units went on sale in 2016, although parts of the main frontage to Abbey Lane remain to be developed in order to integrate the scheme into the streetscape.

Kinsale Yacht Club (KYC) began in 1950 and today is a sailing club that runs events for all ages of sailor and social activities throughout the year. Junior sailing includes Optimists, Lasers and 420's. The yacht classes include Squib (keelboat), International Dragon (keelboat) and A-Class Catamaran as well as three Cruiser Classes (Class I, II and III).

Founded in 1982, the grounds of Kinsale Rugby Football Club are used for the annual Kinsale Sevens event, which attracts international teams and thousands of spectators annually.

The Kinsale GAA club plays in the Carrigdhoun division of Cork GAA. They won the Cork Football Intermediate County Championship in 2011, the first time since 1915.

Kinsale Badminton club which is affiliated with Badminton Ireland is based in St Multose Hall Kinsale. It caters for both adult and juvenile players and enters teams in Cork county Leagues and Cups.

The Kinsale Branch of the Irish Red Cross has been in existence since 1939 and is staffed by volunteers, who are present at local events and activities – including the annual Kinsale Sevens rugby event. The Kinsale Red Cross has 2 ambulances which are housed in a purpose built building in Church Lane and crewed by trained volunteers.

Kinsale competes in the Irish Tidy Towns Competition and was the overall winner in 1986.

Kinsale is the first 'Transition Town' in Ireland, and the Transition Town community organisation, supported by Kinsale town council, holds meetings locally. It has taken some guidance from the Kinsale Energy Descent Action Plan 2021, which has spawned further Transition Towns worldwide.

There are a number of primary and secondary level schools in the area. The town's community school was awarded "Best School in the Republic of Ireland" twice, as well as receiving awards at the BT Young Scientist Exhibition in 2014.

Kinsale College offers a number of further education courses, and the town also has a school of English. 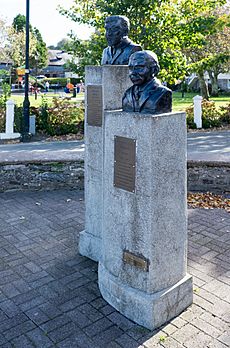 Harbour-side memorial to Timothy and Mortimer McCarthy by Graham Brett, 2000

All content from Kiddle encyclopedia articles (including the article images and facts) can be freely used under Attribution-ShareAlike license, unless stated otherwise. Cite this article:
Kinsale Facts for Kids. Kiddle Encyclopedia.