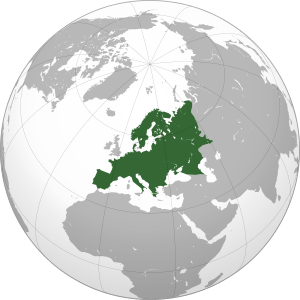 Continental Europe (green area); the boundaries of the continent are somewhat disputed

Continental Europe, also referred to as mainland Europe or simply the Continent (particularly by Britons, Azoreans, Madeirans, Balearic and Canary Spaniards, Icelanders and other European island nations, and peninsular Scandinavians), is the continent of Europe, explicitly excluding the islands of Europe.

The most common definition of continental Europe excludes the Greek Islands, Malta, Sicily, Sardinia, Corsica, the Balearic Islands, Iceland, Ireland, and the United Kingdom and its dependencies. Most definitions extend the boundaries of the continent to its standard boundaries: the Ural Mountains, the Ural River, the Caspian Sea, and the Caucasus Mountains.

Use in the United Kingdom 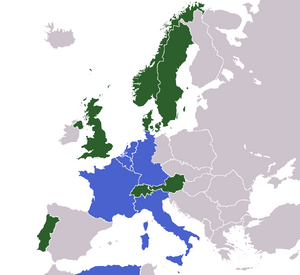 The "core Europe" of the "Inner Six" signatories of the Treaty of Paris (1951) (shown in blue; the French Fourth Republic shown with Algeria)

Derivatively, the adjective continental refers to the social practices or fashion of continental Europe as opposed to those of Britain. Examples include breakfast and, historically, long-range driving (before Britain had motorways) often known as Grand Touring. Continental Europe, when compared to Britain, has numerous defined differences both cultural and tangible. The use of Civil rather than Common Law, different electrical plugs, different time zones for the most part, a different currency, driving on the right, and using the metric system exclusively are a small selection. 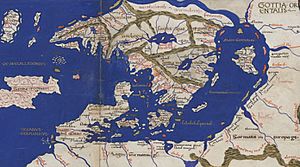 Especially in Germanic studies, continental refers to the European continent excluding the Scandinavian peninsula, Britain, Ireland, and Iceland. The reason for this is that although the Scandinavian peninsula is attached to continental Europe by Karelia and the like, it is usually reached by sea, not by land (which would require travelling north as far as Tornio at the 66th parallel north). Kontinenten (the Continent) is a vernacular Swedish expression that refers to the area excluding Sweden, Norway, and Finland but including Denmark (even the Danish archipelago) and the rest of continental Europe. In Norway, similarly, one speaks about Kontinentet as a separate entity, usually referring to Germany, France, Italy, Spain, Portugal, the Benelux countries, and such. 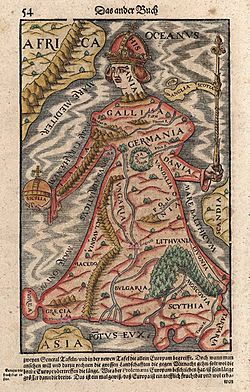 All content from Kiddle encyclopedia articles (including the article images and facts) can be freely used under Attribution-ShareAlike license, unless stated otherwise. Cite this article:
Continental Europe Facts for Kids. Kiddle Encyclopedia.