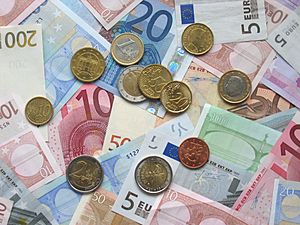 Euro is the currency (money) of the countries in the eurozone. One euro is divided into 100 cent (officially) (singular) or "cents" (unofficially).

Because of the number of different languages in the European Union, there are different, unofficial, names for this unit (the French call them "centimes" and the Spanish "céntimos", for example).

It was created in 1999, but until 1 January 2002 it was used only for electronic payments. In 2002, 12 countries of the European Union (EU) took their state currencies out of circulation and adopted euro notes and coins as their only money. There was a change-over period, called the "transition period", when both the old national money and the euro were accepted, but by 28 February 2002, all 12 countries were using just euros.

On every banknote, there is a picture of a different European building style. All banknotes are the same throughout the entire eurozone; there are no different designs for different countries, unlike the euro coins. One side of each coin is the same in all euro countries. The other side is different since each country who mints the coins inserts a symbol relating to that country. Today there are many different sets of coins. Any of the coins can be used everywhere throughout the eurozone despite the country-specific symbol on the back.

The ten new European countries that entered the European Union in May 2004 are planning to adopt the Euro also. First they must meet some conditions to show that they have stable economies. 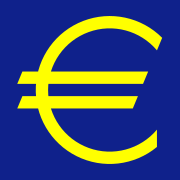 The symbol for the euro is the Greek letter epsilon (E) with two horizontal lines: €. 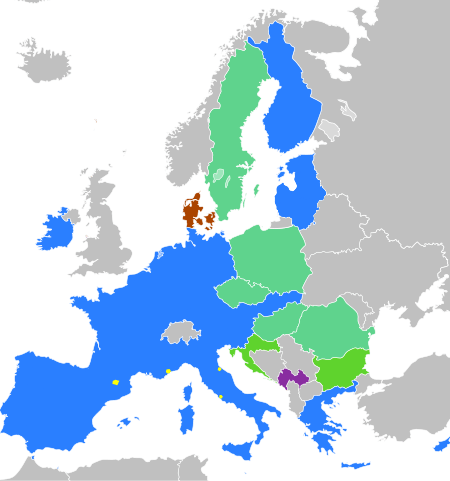 Some people see it as the Latin capital letter C with an equal sign (=).

It is also legal to simply write euro. This is especially useful when the symbol cannot be produced, or the result is not satisfactory.

Members of the eurozone are:

These countries form the Economic and Monetary Union (EMU).

Even though they are not part of the EU, the euro is also the currency used in:

Many other countries' currencies are "pegged" (tied) to, although not exactly equal to, the euro:

All content from Kiddle encyclopedia articles (including the article images and facts) can be freely used under Attribution-ShareAlike license, unless stated otherwise. Cite this article:
Euro Facts for Kids. Kiddle Encyclopedia.