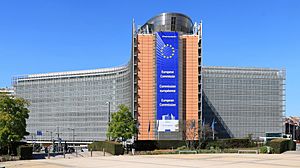 Headquarters of the European Commission in Brussels (Berlaymont building)

The Commission is made of 28 people, one from each of the countries in the EU. One of these people is the President, who was chosen by the Council and Parliament, he decides (with each country) who the other members are and what they do. Each one has a different job, such as looking after industry or trade. If they do not do their job properly, the President can remove them. If he does not, or if the President does not do his job, the Parliament can remove the whole Commission from their jobs (this only happened in 1999).

The name Commission can also mean the 25,000 people who work for the President and his team. They follow the Commission's instructions in looking after the EU or writing a new law. It works in three languages, English, French and German.

All content from Kiddle encyclopedia articles (including the article images and facts) can be freely used under Attribution-ShareAlike license, unless stated otherwise. Cite this article:
European Commission Facts for Kids. Kiddle Encyclopedia.