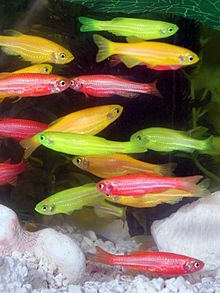 GloFish, the first genetically modified animal to be sold as a pet

A genetically modified organism (GMO) is an organism whose genetic material has been altered using genetic engineering techniques.

Organisms that have been genetically modified include micro-organisms such as bacteria and yeast, insects, plants, fish, and mammals. GMOs are the source of genetically modified foods, and are also widely used in scientific research and to produce goods other than food.

Although Maxam and Gilbert published their chemical sequencing method two years after the ground-breaking paper of Sanger and Coulson on plus-minus sequencing, Maxam–Gilbert sequencing rapidly became more popular, since purified DNA could be used directly, while the initial Sanger method required that each read start be cloned for production of single-stranded DNA. However, with the improvement of the chain-termination method (see below), Maxam-Gilbert sequencing has fallen out of favour due to its technical complexity prohibiting its use in standard molecular biology kits, extensive use of hazardous chemicals, and difficulties with scale-up.

The first genetically modified black, blue and red rose made in the lab.

All content from Kiddle encyclopedia articles (including the article images and facts) can be freely used under Attribution-ShareAlike license, unless stated otherwise. Cite this article:
Genetically modified organism Facts for Kids. Kiddle Encyclopedia.