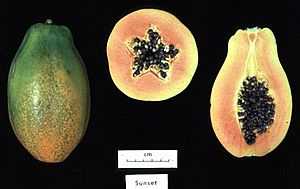 3 views of the Sunset papaya cultivar, which was genetically modified to create the SunUp cultivar, resistant to PRSV.

Research is being done on bacteria which would speed up making cheese. Genetically modified yeast could be used to make beer that has fewer calories.

The approaches taken by governments to assess and manage the development and release of genetically modified organisms (GMOs) vary from country to country. Some of the most marked differences are between the USA and Europe.

The US regulatory policy is the Coordinated Framework for Regulation of Biotechnology. The policy has three main principles:

European Union have the strictest GMO rules in the world. All GMOs, and irradiated food, are considered "new food" and subject to extensive, case-by-case, science based food evaluation by the European Food Safety Authority (EFSA). The criteria for authorization has four broad categories: "safety," "freedom of choice," "labelling," and "traceability".

However many scientists think current studies are not good enough to be sure that genetically modified food is safe.

One of the key issues is whether GM products should be labelled. A study into voluntary labelling in South Africa found that 31% of products labelled as GMO-free had a GM content above 1.0%.

In Canada and the US labelling of GM food is voluntary. In Europe all food (including processed food) or cattle feed which contains greater than 0.9% of approved GMOs must be labelled.

Japan, Malaysia, New Zealand, and Australia require labelling so people can choose between foods that have genetically modified, ordinary or organic origins.

The first crops developed were used for animal or human food and provide resistance to certain pests, diseases, environmental conditions, spoilage or chemical treatments (e.g. resistance to a herbicide).

The second generation of crops aimed to improve the quality, often by altering the nutrient profile.

Third generation genetically modified crops could be used for non-food purposes, including the production of pharmaceutical agents, biofuels, and other industrially useful goods, as well as for bioremediation.

The majority of GM crops have been modified to be resistant to selected herbicides, usually a glyphosate or glufosinate based one.

Although doubts have been raised, most studies have found growing GM crops to be beneficial to farmers through decreased pesticide use as well as increased crop yield and farm profit. 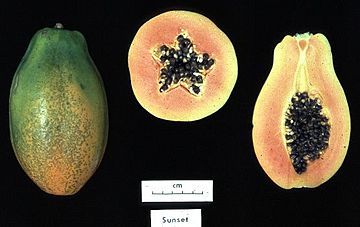 Three views of a papaya, cultivar "Sunset", which was genetically modified to create the cultivar 'SunUp', which is resistant to Papaya ringspot virus

Papaya was genetically modified to resist the ringspot virus (PSRV).

In 2014, the USDA approved a genetically modified potato developed by J. R. Simplot Company that contained ten genetic modifications that prevent bruising and produce less acrylamide when fried. The modifications eliminate specific proteins from the potatoes.

As of 2005, about 13% of the Zucchini (a form of squash) grown in the US was genetically modified to resist three viruses; that strain is also grown in Canada. 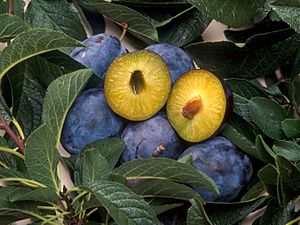 Plums genetically engineered for resistance to plum pox, a disease carried by aphids

In 2013, the USDA approved the import of a GM pineapple that is pink in color and that "overexpresses" a gene derived from tangerines and suppress other genes, increasing production of lycopene. The plant's flowering cycle was changed to provide for more uniform growth and quality. Importation into Hawaii is banned for "plant sanitation" reasons.

In February 2015 Arctic Apples were approved by the USDA, becoming the first genetically modified apple approved for sale in the US. Gene silencing is used to reduce the expression of polyphenol oxidase (PPO), thus preventing the fruit from browning.

Corn used for food and ethanol has been genetically modified to tolerate various herbicides and to express a protein from Bacillus thuringiensis (Bt) that kills certain insects. About 90% of the corn grown in the US was genetically modified in 2010. Corn can be processed into grits, meal and flour as an ingredient in pancakes, muffins, doughnuts, breadings and batters, as well as baby foods, meat products, cereals and some fermented products. Corn-based masa flour and masa dough are used in the production of taco shells, corn chips and tortillas.

Golden rice is the most well known GM crop that is aimed at increasing nutrient value. It is intended to produce a fortified food to be grown and consumed in areas with a shortage of dietary vitamin A, a deficiency which each year is estimated to kill 670,000 children under the age of 5 and cause an additional 500,000 cases of irreversible childhood blindness. In 2018 it gained its first approvals for use as food.

As of December 2017, genetically modified wheat has been evaluated in field trials, but has not been released commercially.

Starch or amylum is a polysaccharide produced by all green plants as an energy store. Pure starch is a white, tasteless and odourless powder. It consists of two types of molecules: the linear and helical amylose and the branched amylopectin. Depending on the plant, starch generally contains 20 to 25% amylose and 75 to 80% amylopectin by weight.

Starch can be further modified to create modified starch for specific purposes, including creation of many of the sugars in processed foods.

Lecithin is a naturally occurring lipid. It can be found in egg yolks and oil-producing plants. It is an emulsifier and thus is used in many foods. Corn, soy and safflower oil are sources of lecithin, though the majority of lecithin commercially available is derived from soy.

The US imports 10% of its sugar, while the remaining 90% is extracted from sugar beet and sugarcane. After deregulation in 2005, glyphosate-resistant sugar beet was extensively adopted in the United States. 95% of beet acres in the US were planted with glyphosate-resistant seed in 2011. GM sugar beets are approved for cultivation in the US, Canada and Japan; the vast majority are grown in the US. GM beets are approved for import and consumption in Australia, Canada, Colombia, EU, Japan, Korea, Mexico, New Zealand, Philippines, the Russian Federation and Singapore. Pulp from the refining process is used as animal feed.

Most vegetable oil used in the US is produced from GM crops canola, corn, cotton and soybeans. Vegetable oil is sold directly to consumers as cooking oil, shortening and margarine and is used in prepared foods.

Livestock and poultry are raised on animal feed, much of which is composed of the leftovers from processing crops, including GM crops. For example, approximately 43% of a canola seed is oil. What remains after oil extraction is a meal that becomes an ingredient in animal feed and contains canola protein.

Rennet is a mixture of enzymes used to coagulate milk into cheese. Originally it was available only from the fourth stomach of calves, and was scarce and expensive, or was available from microbial sources, which often produced unpleasant tastes. Genetic engineering made it possible to extract rennet-producing genes from animal stomachs and insert them into bacteria, fungi or yeasts to make them produce chymosin, the key enzyme. The modified microorganism is killed after fermentation. Chymosin is isolated from the fermentation broth, so that the Fermentation-Produced Chymosin (FPC) used by cheese producers has an amino acid sequence that is identical to bovine rennet. The majority of the applied chymosin is retained in the whey.

Genetically modified livestock are organisms from the group of cattle, sheep, pigs, goats, birds, horses and fish kept for human consumption, whose genetic material (DNA) has been altered using genetic engineering techniques. In some cases, the aim is to introduce a new trait to the animals which does not occur naturally in the species, i.e. transgenesis.

Some mammals typically used for food production have been modified to produce non-food products, a practice sometimes called Pharming.

A GM salmon, awaiting regulatory approval since 1997, was approved for human consumption by the American FDA in November 2015, to be raised in specific land-based hatcheries in Canada and Panama.

All content from Kiddle encyclopedia articles (including the article images and facts) can be freely used under Attribution-ShareAlike license, unless stated otherwise. Cite this article:
Genetically modified food Facts for Kids. Kiddle Encyclopedia.