Papaya is a tall herbaceous plant in the genus Carica; its edible fruit is also called papaya. It is native to the tropical region of America, mainly from southern Mexico to Central America. Now these plants are grown in all tropical regions of the world.

Papayas are plants of tropical regions and, for growth and fruit production, they need a warm climate. They cannot live with low temperatures.

This is now the only species in its genus. As a result of genetic research, the other species were put in three new genera.

The genus Carica was given that name by Linnaeus because the leaves of these plants are like those of the common fig (Ficus carica).

The common name comes from the Taíno word papáia that was changed in Spanish to papaya, the word most used worldwide, with some changes. In Australia and some countries of the Caribbean, the fruit is called papaw or pawpaw but another North American plant, Asimina triloba of the Annonaceae family has also that name.

The French name for the fruit is papaye and papayer for the plant. In Portuguese, the fruit is called mamão, papaia or ababaia and the tree mamoeiro or papaeira. In Kerala it commonly known as Kapanga - കപ്പങ്ങ. In Spanish, there are other names besides papaya. In Cuba, it is called fruta bomba except in the eastern provinces where papaya is used. In the Dominican Republic, Los Llanos (Venezuela) and Eastern Central Colombia, the name is lechosa. In Argentina and Paraguay, the fruit is called mamón.

Other names and translations can be seen at Wiktionary. 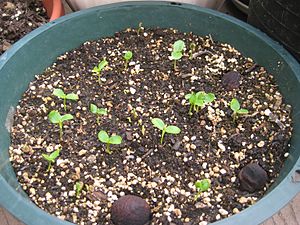 It is a large plant, like a tree, usually without branches; it is a herbaceous plant because the stem does not have much wood and remains soft and green until its death. The single stem grows from 5 to 10 m tall with all the leaves on the top. The leaves are large, 50–70 cm wide.

Some plants have perfect (with female and male organs) flowers but other plants have flowers with only one sex (female or male).

The skin of the fruit is thin and tough; it is not eaten because is too bitter. First, the skin is green but it changes to yellow in ripe fruits, ready to be eaten. In a ripe fruit, the pulp is yellow, orange, pink, and even light red. Inside the fruit, there are many small black seeds.

Ripe papayas are eaten fresh, after taking out the skin and the seeds; sometimes, they are cut in small pieces and mixed with other fruits for a fruit salad. Papayas that are not completely ripe can be cut in pieces and cooked with sugar and eaten as dessert. In tropical regions, it is very popular to take papaya juice, after taking the skin and seeds out; this juice can be mixed with milk to make smoothies.

Green papayas, those that are not ripe, are eaten in some Asiatic countries in salads, curries and soups but they should be boiled before eating them. Young leaves and stems are also cooked as a vegetable. Green papaya is used in Thai cuisine, both raw and cooked.

The latex (a sap like milk) from the green fruits, the leaves and the stem are rich in papain, an enzyme that breaks down tough meat fibers. Papain is a component in products (meat tenderizers) sold in shops and that is used to make meat softer before cooking it.

Papaya seeds have a peppery taste and are a great substitute for black peppercorns.

All content from Kiddle encyclopedia articles (including the article images and facts) can be freely used under Attribution-ShareAlike license, unless stated otherwise. Cite this article:
Papaya Facts for Kids. Kiddle Encyclopedia.