Venezuela is a country in northern South America. Its official name is República Bolivariana de Venezuela (Bolivarian Republic of Venezuela). The official language is Spanish, and its capital is Caracas. Venezuela produces a large amount of oil every year, and has one of the largest oil supplies in the world.

Ancient Venezuelans came from the east, west, south, and north. Christopher Columbus was the first European to set foot on the land, but there were already natives living there for a long time. The Spaniards first conquered Venezuela. Slaves were imported from Africa.

Venezuela's inhabitants are very racially mixed. This comes from the colonial period. When whites (the British, Spaniards, French, etc.) conquered America's territory, they took their black African slaves to America to work. During Venezuela's colonial time, black people did not have any rights. They just worked for food. The native people were taught Roman Catholicism. For a long time, white creoles, people in Venezuela that were descended from Spaniards but considered Venezuela home, headed society. The Venezuelan people did not like that, and started thinking about independence. On July 24, 1823, Venezuela won its independence, led by Simón Bolívar. The current president is Nicolás Maduro.

Venezuela's economy is based on oil, cotton, cocoa, sugar, coffee, and tobacco.

Some other languages spoken in Venezuela are Carib, Guahibo, Warao, Wayuu, Pemon, and Piaroa. Most people are Roman Catholic at 96%, and a small minority is Protestant at 2%. 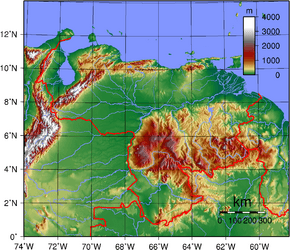 Shaped roughly like a triangle, the country has a 2,800 km (1,700 mi) coastline in the north, which includes numerous islands in the Caribbean and the northeast borders the northern Atlantic Ocean. Most observers describe Venezuela in terms of four fairly well defined topographical regions: the Maracaibo lowlands in the northwest, the northern mountains extending in a broad east-west arc from the Colombian border along the northern Caribbean coast, the wide plains in central Venezuela, and the Guiana Highlands in the southeast.

The northern mountains are the extreme northeastern extensions of South America's Andes mountain range. Pico Bolívar, the nation's highest point at 4,979 m (16,335 ft), lies in this region. To the south, the dissected Guiana Highlands contain the northern fringes of the Amazon Basin and Angel Falls, the world's highest waterfall, as well as tepuis, large table-like mountains. The country's center is characterized by the llanos, which are extensive plains that stretch from the Colombian border in the far west to the Orinoco River delta in the east. The Orinoco, with its rich alluvial soils, binds the largest and most important river system of the country; it originates in one of the largest watersheds in Latin America. The Caroní and the Apure are other major rivers.

Venezuela borders Colombia to the west, Guyana to the east, and Brazil to the south. Caribbean islands such as Trinidad and Tobago, Grenada, Curaçao, Aruba, and the Leeward Antilles lie near the Venezuelan coast. Venezuela has territorial disputes with Guyana, formerly United Kingdom, largely concerning the Essequibo area and with Colombia concerning the Gulf of Venezuela. In 1895, after years of diplomatic attempts to solve the border dispute, the dispute over the Essequibo River border flared up. It was submitted to a "neutral" commission (composed of British, American, and Russian representatives and without a direct Venezuelan representative), which in 1899 decided mostly against Venezuela's claim.

Venezuela's most significant natural resources are petroleum and natural gas, iron ore, gold, and other minerals. It also has large areas of arable land and water.

View of the tepuis, Kukenan and Roraima, in the Gran Sabana. Canaima National Park. Tepuis are among the attractions of the park, these mountains are among the oldest exposed formations on the planet. 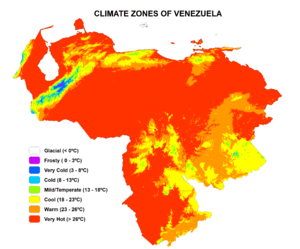 Venezuelan climatic types, according to their thermal floors

Venezuela is entirely located in the tropics over the Equator to around 12° N. Its climate varies from humid low-elevation plains, where average annual temperatures range as high as 35 °C (95.0 °F), to glaciers and highlands (the páramos) with an average yearly temperature of 8 °C (46.4 °F). Annual rainfall varies from 430 mm (16.9 in) in the semiarid portions of the northwest to over 1,000 mm (39.4 in) in the Orinoco Delta of the far east and the Amazonian Jungle in the south. The precipitation level is lower in the period from August through April. These periods are referred to as hot-humid and cold-dry seasons. Another characteristic of the climate is this variation throughout the country by the existence of a mountain range called "Cordillera de la Costa" which crosses the country from east to west. The majority of the population lives in these mountains. 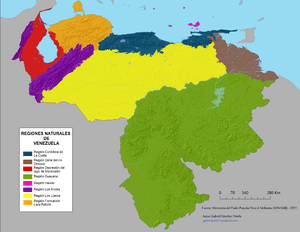 Map of Natural regions of Venezuela 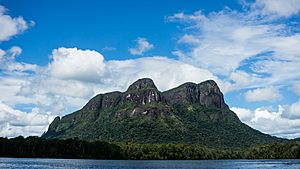 The Amazon of Venezuela and in the background the Autana Tepui 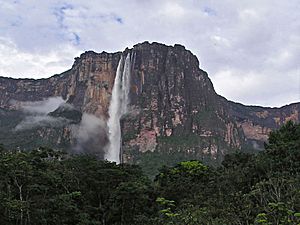 Venezuela lies within the Neotropic ecozone; large portions of the country were originally covered by moist broadleaf forests. One of 17 megadiverse countries, Venezuela's habitats range from the Andes Mountains in the west to the Amazon Basin rainforest in the south, via extensive llanos plains and Caribbean coast in the center and the Orinoco River Delta in the east. They include xeric scrublands in the extreme northwest and coastal mangrove forests in the northeast. Its cloud forests and lowland rainforests are particularly rich.

Animals of Venezuela are diverse and include manatees, three-toed sloth, two-toed sloth, Amazon river dolphins, and Orinoco crocodiles, which have been reported to reach up to 6.6 m (22 ft) in length. Venezuela hosts a total of 1,417 bird species, 48 of which are endemic. Important birds include ibises, ospreys, kingfishers, and the yellow-orange Venezuelan troupial, the national bird. Notable mammals include the giant anteater, jaguar, and the capybara, the world's largest rodent. More than half of Venezuelan avian and mammalian species are found in the Amazonian forests south of the Orinoco.

For the fungi, an account was provided by R.W.G. Dennis which has been digitized and the records made available on-line as part of the Cybertruffle Robigalia database. That database includes nearly 3,900 species of fungi recorded from Venezuela, but is far from complete, and the true total number of fungal species already known from Venezuela is likely higher, given the generally accepted estimate that only about 7% of all fungi worldwide have so far been discovered.

Among plants of Venezuela, over 25,000 species of orchids are found in the country's cloud forest and lowland rainforest ecosystems. These include the flor de mayo orchid (Cattleya mossiae), the national flower. Venezuela's national tree is the araguaney, whose characteristic lushness after the rainy season led novelist Rómulo Gallegos to name it "[l]a primavera de oro de los araguaneyes" (the golden spring of the araguaneyes). The tops of the tepuis are also home to several carnivorous plants including the marsh pitcher plant, Heliamphora, and the insectivorous bromeliad, Brocchinia reducta.

Venezuela is among the top 20 countries in terms of endemism. Among its animals, 23% of reptilian and 50% of amphibian species are endemic. Although the available information is still very small, a first effort has been made to estimate the number of fungal species endemic to Venezuela: 1334 species of fungi have been tentatively identified as possible endemics of the country. Some 38% of the over 21,000 plant species known from Venezuela are unique to the country. 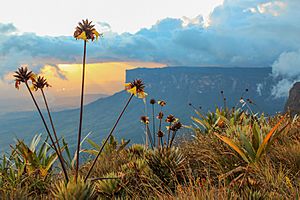 Tepui shrublands is an ecosystem that is considered almost endemic to Venezuela and currently classified Least Concern (LC) according to the IUCN Red List of Ecosystems.

Venezuela is one of the 10 most biodiverse countries on the planet, yet it is one of the leaders of deforestation due to economic and political factors. Each year, roughly 287,600 hectares of forest are permanently destroyed and other areas are degraded by mining, oil extraction, and logging. Between 1990 and 2005, Venezuela officially lost 8.3% of its forest cover, which is about 4.3 million ha. In response, federal protections for critical habitat were implemented; for example, 20% to 33% of forested land is protected. The country's biosphere reserve is part of the World Network of Biosphere Reserves; five wetlands are registered under the Ramsar Convention. In 2003, 70% of the nation's land was under conservation management in over 200 protected areas, including 43 national parks. Venezuela's 43 national parks include Canaima National Park, Morrocoy National Park, and Mochima National Park. In the far south is a reserve for the country's Yanomami tribes. Covering 32,000 square miles (82,880 square kilometres), the area is off-limits to farmers, miners, and all non-Yanomami settlers.

Venezuela was one of the few countries that did not enter an INDC at COP21. Many terrestrial ecosystems are considered endangered, specially the dry forest in the northern regions of the country and the coral reefs in the Caribbean coast.

All content from Kiddle encyclopedia articles (including the article images and facts) can be freely used under Attribution-ShareAlike license, unless stated otherwise. Cite this article:
Venezuela Facts for Kids. Kiddle Encyclopedia.