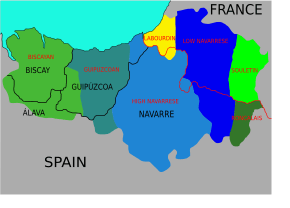 Basque (Basque: Euskara) is the language spoken by the Basque people in the Basque Country and its diaspora. Although most other Europeans speak Indo-European languages, Basque is a language isolate and is not related to them or to any other language in the world.

The ancestors of Basques are among the oldest residents of Europe, and their origins are unknown, as are the origins of the language. Many scholars have tried to link Basque to Etruscan, African languages, Caucasian languages and so on, but most see Basque as a language isolate. A connection with the Iberian language has given some hope, but it is unclear whether similarities are caused by genetic relations or mere vicinity. It was spoken long before the Romans brought Latin to the Iberian Peninsula.

Percentage of fluent speakers of Basque.

Basque is spoken in an area that is smaller than what is known as the Basque Country (Basque: Euskal Herria). Basque was once spoken over a larger area, but Latin took over in some places.

Historically, Latin or a Romance language has been official.

Today Basque holds co-official language status in the Basque regions of Spain: the full autonomous community of the Basque Country and some parts of Navarre. Basque has no official standing in the Northern Basque area of France, and French citizens are barred from using Basque in a French court of law.

There are six main Basque dialects, comprising Biscayan, Guipuzcoan, and High Navarrese (in Spain), and Low Navarrese, Labourdin, and Souletin (in France). The dialect boundaries are not, however, congruent with political boundaries. One of the first scientific studies of Basque dialects, in particular the auxiliary verb forms, was made by Louis-Lucien Bonaparte (a nephew of Napoleon Bonaparte).

There is now a unified version called Batua ("unified" in Basque), which is the language taught in schools. Batua is based largely on the Gipuzkoa regional dialect.

Basque is an ergative-absolutive language. Its grammar is very complex, with many different cases for nouns.

The vowel system is the same as most Spanish-speakers and has five pure vowels.

By contact with nearby peoples, Basque has borrowed words from Latin, Spanish, French, Gascon and others but accepted fewer than Indo-European languages. Some claim that many of its words come from Latin, but phonetic evolution has made many of them now appear as if they were native words, e.g. lore ("flower", from florem), errota ("mill", from rotam, "[mill] wheel"), gela ("room", from cellam).

Basque is written with the Latin alphabet. The universal special letter is ñ, which is pronounced like the n in onion, and ç and ü are also used. Basque does not use c, q, v, w, y except for loanwords and are not considered part of the alphabet. Also, x is pronounced as a sh, as in shine.

All content from Kiddle encyclopedia articles (including the article images and facts) can be freely used under Attribution-ShareAlike license, unless stated otherwise. Cite this article:
Basque language Facts for Kids. Kiddle Encyclopedia.