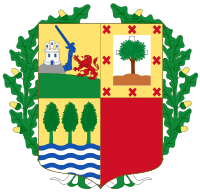 The Basque Autonomous Community (Basque: Euskal Autonomia Erkidegoa, EAE; Spanish: Comunidad Autónoma Vasca, CAV) is an autonomous community in northern Spain. It has the Basque provinces of Álava, Biscay, and Gipuzkoa. It is also called the "Basque Country."

The Basque Country or Basque Autonomous Community was called a nationality in Spain by the Spanish Constitution of 1978. Navarre decided not to be part of the Basque Country. Instead, it became a different autonomous community.

There is no capital in the autonomous community right now, but the city of Vitoria-Gasteiz, in Álava, has the Basque Parliament, the Basque Government, and the house of the President of the Basque Autonomous Community (the Palace of Ajuria Enea). The High Court of Justice of the Basque Country is in Bilbao. Vitoria-Gasteiz is the city with the most land, with 277 km2 (107 sq mi), Bilbao has the most people, with 353,187.

People also say Basque Country when they talk about the larger cultural region (Basque: Euskal Herria), the home of the Basque people, which has the autonomous community in it.

These provinces make up the autonomous community: 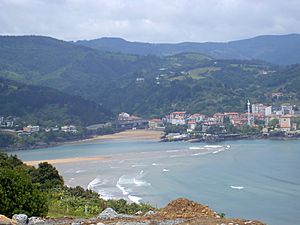 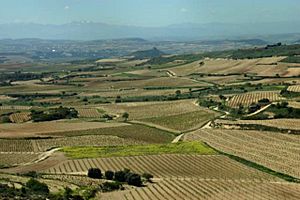 Rioja vineyards near the Ebro

The Basque Country touches Cantabria and the Burgos province to the west, the Bay of Biscay to the north, France (Nouvelle-Aquitaine) and Navarre to the east and La Rioja (the Ebro River) to the south. The territory has three parts, separated by the Basque Mountains. The main line of mountains makes the watershed between the Atlantic and Mediterranean basins. The highest place in the mountains is in the Aizkorri massif (1551 m). The three areas are:

The Atlantic Basin has many valleys with short rivers that flow from the mountains to the Bay of Biscay, like the Nervión, Urola, and Oria. The coast is rough, with high cliffs. The main parts of the coast are the Bilbao Abra Bay and the Estuary of Bilbao, the Urdaibai estuary and the Bidasoa-Txingudi Bay that makes the border with France.

Between the two mountain ranges, there is a high plateau called Llanada Alavesa (the Álava Plains), where the capital Vitoria-Gasteiz. The rivers flow south from the mountains to the Ebro River. The main rivers are the Zadorra River and Bayas River.

The Ebro is a river in that starts in Cantabria and flows through the southern part of the Basque Autonomous Community. This makes an area called the Ebro Valley. The Ebro Valley is well-known for famous wine.

In the Basque Autonomous Community, rivers usually flow down from the Basque Mountains. The mountains also separate the climates in the autonomous community: The northern valleys in Biscay and Gipuzkoa and the valley of Ayala in Álava are part of Green Spain, where there is a lot of rain.

The climate in the middle part is more like the middle of Spain. This gives warm, dry summers and cold, snowy winters.

The Ebro Valley's climate is just like the middle part of Spain: winters are cold and dry and summers very warm and dry, and it rains the most in spring and autumn. Overall, it does not rain very much in this part of the autonomous community.

Almost half of the 2,155,546 people in the Basque Autonomous Community live in Greater Bilbao, the area around the city of Bilbao. Of the ten biggest cities, six are part of Bilbao's conurbation (Bilbao, Barakaldo, Getxo, Portugalete, Santurtzi and Basauri). This is also called Greater Bilbao.

Because 28.2% of the Basque population is born outside the autonomous community, immigration is important for Basque demographics. Since the year 1900, most of these people have come from other parts of spain, like Galicia or Castile and León. Recently, many of these people have gone back to the places they were born. Now, immigration comes from other countries, mostly in South America.

Roman Catholicism is, by far, the biggest religion in the Basque Country. In 2012, 58.6% of Basques called themselves as Roman Catholic but many people do not believe in religion: 24.6% were non-religious and 12.3% of Basques were atheist.

All content from Kiddle encyclopedia articles (including the article images and facts) can be freely used under Attribution-ShareAlike license, unless stated otherwise. Cite this article:
Basque Country (autonomous community) Facts for Kids. Kiddle Encyclopedia.