San Sebastián is a coastal city and municipality in the Basque Country, Spain. It lies on the coast of the Bay of Biscay, 20 km (12 miles) from the French border. It's the capital of Gipuzkoa. The municipality's population is 186,409 (2012). Locals call themselves donostiarra (singular), both in Spanish and Basque. 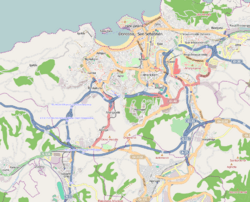 The city is located in the north of the Basque Autonomous Community, on the southern coast of the Bay of Biscay. San Sebastián's three beaches, Concha, Ondarreta, and Zurriola, make it a popular resort. The town is surrounded by easily accessible hilly areas: Urgull (adjacent to the old part of the city), Mount Ulia (extending east to Pasaia), Mount Adarra (south of the city) and Igeldo (overlooking Concha Bay from the west).

The city sits at the mouth of the River Urumea, Donostia was built to a large extent on the river's wetlands over the last two centuries. In fact, the city centre and the districts of Amara Berri and Riberas de Loiola lie on the former bed of the river, which was diverted to its current canalized course in the first half of the 20th century.

San Sebastián features an oceanic climate (Köppen Cfb) with warm summers and cool winters. Like many cities with this climate, San Sebastián typically experiences cloudy or overcast conditions for the majority of the year, typically with some precipitation. The city averages roughly 1,650 mm (65 in) of precipitation annually, which is fairly evenly spread throughout the year. However, the city is somewhat drier and noticeably sunnier in the summer months, experiencing on average approximately 100 mm (3.94 in) of precipitation during those months. Average temperatures range from 8.9 °C (48.0 °F) in January to 21.5 °C (70.7 °F) in August.

All content from Kiddle encyclopedia articles (including the article images and facts) can be freely used under Attribution-ShareAlike license, unless stated otherwise. Cite this article:
San Sebastián Facts for Kids. Kiddle Encyclopedia.