Bay of Biscay facts for kids 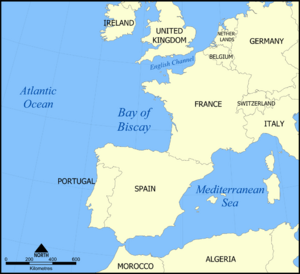 The Bay of Biscay is a gulf of the northeast Atlantic Ocean south of the Celtic Sea. It is along the western coast of France from Brest south to the Spanish border, and the northern coast of Spain west to Cape Ortegal. It is named in English after the province of Biscay, in the Spanish Basque Country. 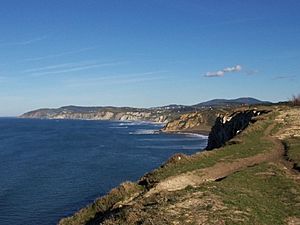 Spanish coast along the Bay of Biscay

The Bay of Biscay is home to some of the Atlantic Ocean's worst weather. Large storms occur in the bay, especially during the winter months. Until recently ships would be wrecked in Biscay storms, and many lives were lost. Improved ships and weather prediction have helped to reduce these problems.

The main rivers that empty into the Bay of Biscay are:

The main cities on the shores of the Bay of Biscay are: 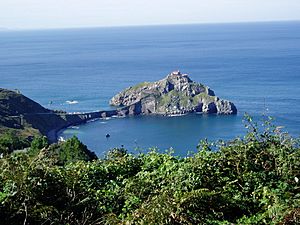 Many species of whales and dolphins can be seen in this area. It is one of the few places where the beaked whales such as the Cuvier's beaked whale have been seen frequently. This is the best study area for beaked whales in the world. The best areas to see the larger cetaceans are in the deep waters beyond the continental shelf.

All content from Kiddle encyclopedia articles (including the article images and facts) can be freely used under Attribution-ShareAlike license, unless stated otherwise. Cite this article:
Bay of Biscay Facts for Kids. Kiddle Encyclopedia.