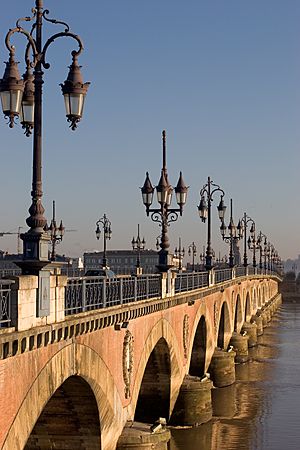 Bordeaux is located close to the European Atlantic coast, in the southwest of France and in the north of the Aquitaine region. It is around 500 km (310 mi) southwest of Paris. The city is built on a bend of the river Garonne, and is divided into two parts: the right bank to the east and left bank in the west. Historically the left bank is more developed because when flowing outside the bend, the water makes a furrow of the required depth to allow the passing of merchant ships, which used to offload on this side of the river. In Bordeaux, the Garonne River is accessible to ocean liners. The right bank of the Garonne is a low-lying, often marshy plain.

Bordeaux's climate is usually classified as an oceanic climate (Köppen climate classification Cfb); however, the summers tend to be warmer and the winters milder than most areas of similar classification. Substantial summer rainfall prevents its climate from being classified as Mediterranean.

Winters are cool because of the prevalence of westerly winds from the Atlantic. Summers are warm and long due to the influence from the Bay of Biscay (surface temperature reaches 21 to 22 °C (70 to 72 °F). The average seasonal winter temperature is 7.1 °C (44.8 °F), but recent winters have been warmer than this. Frosts in the winter are commonplace, occurring several times during a winter, but snowfall is very rare, occurring only once every three years. The average summer seasonal temperature is 20.7 °C (69.3 °F). The summer of 2003 set a record with an average temperature of 23.3 °C (73.9 °F).

Bordeaux is a major centre for business in France as it has the fifth largest metropolitan population in France. 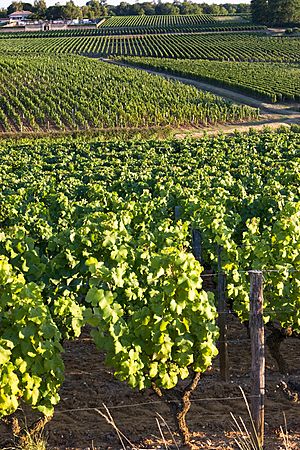 The vine was introduced to the Bordeaux region by the Romans, probably in the mid-first century, to provide wine for local consumption, and wine production has been continuous in the region since.

Bordeaux now has about 116,160 hectares (287,000 acres) of vineyards, 57 appellations, 10,000 wine-producing châteaux and 13,000 grape growers. With an annual production of approximately 960 million bottles, Bordeaux produces large quantities of everyday wine as well as some of the most expensive wines in the world. Included among the latter are the area's five premier cru (first growth) red wines (four from Médoc and one, Château Haut-Brion, from Graves), established by the Bordeaux Wine Official Classification of 1855: The first growths are:

In 1855, Mouton-Rothschild was ranked a Second Growth. In 1973, it was elevated to First Growth status.

Both red and white wines are made in Bordeaux. Red Bordeaux is called claret in the United Kingdom. Red wines are generally made from a blend of grapes, and may be made from Cabernet Sauvignon, Merlot, Cabernet Franc, Petit verdot, Malbec, and, less commonly in recent years, Carménère.

White Bordeaux is made from Sauvignon blanc, Sémillon, and Muscadelle. Sauternes is a sub-region of Graves known for its intensely sweet, white, dessert wines such as Château d'Yquem.

Because of a wine glut (wine lake) in the generic production, the price squeeze induced by an increasingly strong international competition, and vine pull schemes, the number of growers has recently dropped from 14,000 and the area under vine has also decreased significantly. In the meantime, the global demand for first growths and the most famous labels markedly increased and their prices skyrocketed.

The Cité du Vin, a museum as well as a place of exhibitions, shows, movie projections and academic seminars on the theme of wine opened its doors in June 2016.

The Laser Mégajoule will be one of the most powerful lasers in the world, allowing fundamental research and the development of the laser and plasma technologies. This project, carried by the French Ministry of Defence, involves an investment of 2 billion euros. The "Road of the lasers", a major project of regional planning, promotes regional investment in optical and laser related industries leading to the Bordeaux area having the most important concentration of optical and laser expertise in Europe.

Some 20,000 people work for the aeronautic industry in Bordeaux. The city has some of the biggest companies including Dassault, EADS Sogerma, Snecma, Thales, SNPE, and others. The Dassault Falcon private jets are built there as well as the military aircraft Rafale and Mirage 2000, the Airbus A380 cockpit, the boosters of Ariane 5, and the M51 SLBM missile.

Tourism, especially wine tourism, is a major industry. Globelink.co.uk mentioned Bordeaux as the best tourist destination in Europe in 2015.

Access to the port from the Atlantic is via the Gironde estuary. Almost nine million tonnes of goods arrive and leave each year. 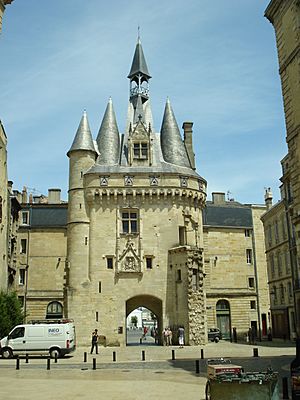 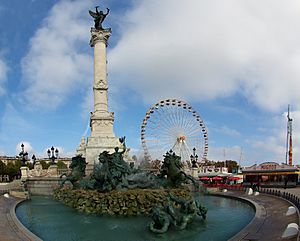 Column of the Girondins on the Esplanade des Quinconces 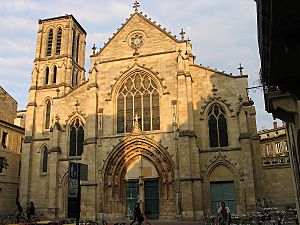 The church of St Pierre 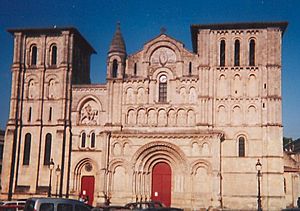 Façade of the Church of the Holy Cross 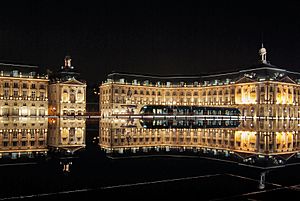 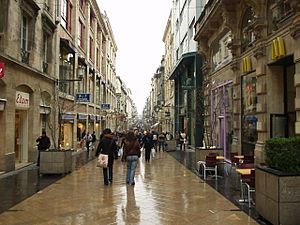 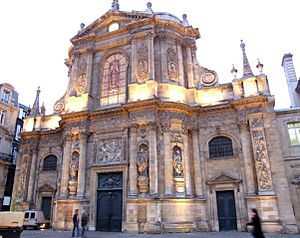 Bordeaux is classified "City of Art and History". The city is home to 362 monuments historiques (only Paris has more in France) with some buildings dating back to Roman times. Bordeaux has been inscribed on UNESCO World Heritage List as "an outstanding urban and architectural ensemble".

Bordeaux is home to one of Europe's biggest 18th-century architectural urban areas, making it a sought-after destination for tourists and cinema production crews. It stands out as one of the first French cities, after Nancy, to have entered an era of urbanism and metropolitan big scale projects, with the team Gabriel father and son, architects for King Louis XV, under the supervision of two intendants (Governors), first Nicolas-François Dupré de Saint-Maur then the Marquis de Tourny.

Saint-André Cathedral, Saint-Michel Basilica and Saint-Seurin Basilica are part of the World Heritage Sites of the Routes of Santiago de Compostela in France.

Bordeaux is twinned with:

All content from Kiddle encyclopedia articles (including the article images and facts) can be freely used under Attribution-ShareAlike license, unless stated otherwise. Cite this article:
Bordeaux Facts for Kids. Kiddle Encyclopedia.