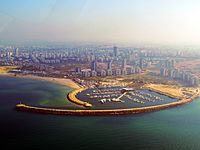 Ashdod (Hebrew: אַשְׁדּוֹד; Arabic: اشدود‎‎, إسدود) is the sixth-largest city in Israel. Ashdod is Israel's largest port, since about 60% of the country's imported goods come through the city.

Ashdod has a Mediterranean climate with hot summers, pleasant spring and fall, and cool, rainy winters. The humidity is usually high many times year round, and rain occurs mainly from November to March.

Over 95% of Ashdod's population is Jewish, even though only about 30% follow their religion. The city is also home to the world's largest Karaite community, with about five thousand members.

All content from Kiddle encyclopedia articles (including the article images and facts) can be freely used under Attribution-ShareAlike license, unless stated otherwise. Cite this article:
Ashdod Facts for Kids. Kiddle Encyclopedia.