It was ruled by the Umayyad Dynasty (Arabic: بنو أمية‎code: ar is deprecated , Banu Umayyah) who came from Mecca, in present-day Saudi Arabia. Damascus was the capital from 661–744, Harrran from 744–750, and in exile their capital was Córdoba (756–1031).

According to tradition, the Umayyad family (also known as the Banu Abd-Shams) and the Islamic Prophet Muhammad both have a common ancestor, Abd Manaf ibn Qusai. Muhammad descended from Abd Munaf via his son Hashim, the Umayyads descended from Abd Munaf via a different son, Abd-Shams. The two families are therefore considered to be different clans (those of Hashim and of Umayya, respectively) of the same Arabian tribe (that of the Quraish). 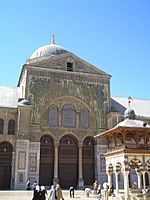