Dome of the Rock facts for kids 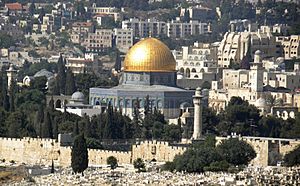 Dome of the Rock as viewed from Mount Scopus and showing the walls of the Old City.

The Dome of the Rock (Arabic: مسجد قبة الصخرة‎code: ar is deprecated , transliteration: Masjid Qubbat As-Sakhrah) is a Islamic shrine in Jerusalem. It is on the Temple Mount in the Old City.

It was built from 691 from 692 by Caliph Abd al-Malik. It is built on the spot where the Jewish Temple is believed to have been, and where Muslims believe Muhammad went up to heaven.

Reconstruction of Herod's Temple as seen from the east (Holyland Model of Jerusalem, 1966)

The Dome of the Rock is situated in the center of the Temple Mount, the site of the Temple of Solomon and the Jewish Second Temple, which had been greatly expanded under Herod the Great in the 1st century BCE. Herod's Temple was destroyed in 70 CE by the Romans, and after the Bar Kokhba revolt in 135 CE, a Roman temple to Jupiter Capitolinus was built at the site.

Jerusalem was ruled by the Christian Byzantine Empire throughout the 4th to 6th centuries. During this time, Christian pilgrimage to Jerusalem began to develop. The Church of the Holy Sepulchre was built under Constantine in the 320s, but the Temple Mount was left undeveloped after a failed project of restoration of the temple under Julian the Apostate.

The Dome of the Rock is now mostly assumed to have been built by the order of Umayyad Caliph Abd al-Malik and his son and successor Al-Walid I. According to Sibt ibn al-Jawzi, construction started in 687. Construction cost was reportedly seven times the yearly tax income of Egypt. A dedicatory inscription in Kufic script is preserved inside the dome. The date is recorded as AH 72 (691/2 CE), the year historians believe the construction of the original Dome was completed. In this inscription, the name of al-Malik was deleted and replaced by the name of Abbasid caliph Al-Ma'mun. This alteration of the original inscription was first noted by Melchior de Vogüé in 1864. Some scholars have suggested that the dome was added to an existing building, built either by Muawiyah I (r. 661–680), or indeed a Byzantine building dating to before the Muslim conquest, built under Heraclius (r. 610–641).

Its architecture and mosaics were patterned after nearby Byzantine churches and palaces. The two engineers in charge of the project were Raja ibn Haywah, a Muslim theologian from Beit She'an and Yazid Ibn Salam, a non-Arab who was Muslim and a native of Jerusalem. 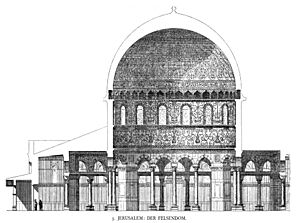 Cross section of the Dome (print from 1887, after the first detailed drawings of the Dome, made by Frederick Catherwood in 1833).

The structure was basically octagonal. It comprised a wooden dome, approximately 20 m (66 ft) in diameter, which was mounted on an elevated drum consisting of a circle of 16 piers and columns. Surrounding this circle was an octagonal arcade of 24 piers and columns.

The original construction was surrounded by open arcades, like the Dome of the Chain. Under Abbasid caliph Al-Ma'mun (r. 813–833), an octagonal wall was added. 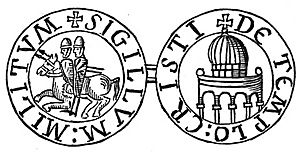 For centuries Christian pilgrims were able to come and experience the Temple Mount, but escalating violence against pilgrims to Jerusalem (Al-Hakim bi-Amr Allah, who ordered the destruction of the Holy Sepulchre, was an example) instigated the Crusades. The Crusaders captured Jerusalem in 1099 and the Dome of the Rock was given to the Augustinians, who turned it into a church, while the Al-Aqsa Mosque became a royal palace. The Knights Templar, active from c. 1119, identified the Dome of the Rock as the site of the Temple of Solomon and set up their headquarters in the Al-Aqsa Mosque adjacent to the Dome for much of the 12th century. The Templum Domini, as they called the Dome of the Rock, featured on the official seals of the Order's Grand Masters (such as Everard des Barres and Renaud de Vichiers), and soon became the architectural model for round Templar churches across Europe.

Jerusalem was recaptured by Saladin on 2 October 1187, and the Dome of the Rock was reconsecrated as a Muslim shrine. The cross on top of the dome was replaced by a crescent, and a wooden screen was placed around the rock below. Saladin's nephew al-Malik al-Mu'azzam Isa carried out other restorations within the building, and added the porch to the Al-Aqsa Mosque.

The Dome of the Rock was the focus of extensive royal patronage by the sultans during the Mamluk period, which lasted from 1250 until 1510.

During the reign of Suleiman the Magnificent (1520–1566) the exterior of the Dome of the Rock was covered with tiles. This work took seven years.

The interior of the dome is lavishly decorated with mosaic, faience and marble, much of which was added several centuries after its completion. It also contains Qur'anic inscriptions. Surah Ya Sin (the "Heart of the Quran") is inscribed across the top of the tile work and was commissioned in the 16th century by Suleiman the Magnificent. Al-Isra, the Surah 17 which tells the story of the Isra or Night Journey, is inscribed above this.

Adjacent to the Dome of the Rock, the Ottomans built the free-standing Dome of the Prophet in 1620. Large-scale renovation was undertaken during the reign of Mahmud II in 1817.

In a major restoration project undertaken in 1874–75 during the reign of the Ottoman Sultan Abdülaziz, all the tiles on the west and southwest walls of the octagonal part of the building were removed and replaced by copies that had been made in Turkey. 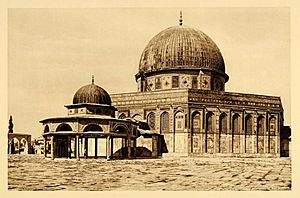 Haj Amin al-Husseini, appointed Grand Mufti by the British during the 1917 mandate of Palestine, along with Yaqub al-Ghusayn, implemented the restoration of the Dome of the Rock and the Al-Aqsa Mosque in Jerusalem.

The Dome of the Rock was badly shaken during the 11 July 1927 Jericho earthquake, damaging many of the repairs that had taken place over previous years.

In 1955, an extensive program of renovation was begun by the government of Jordan, with funds supplied by Arab governments and Turkey. The work included replacement of large numbers of tiles dating back to the reign of Suleiman the Magnificent, which had become dislodged by heavy rain. In 1965, as part of this restoration, the dome was covered with a durable aluminium bronze alloy made in Italy that replaced the lead exterior. Before 1959, the dome was covered in blackened lead. In the course of substantial restoration carried out from 1959 to 1962, the lead was replaced by aluminum-bronze plates covered with gold leaf.

A few hours after the Israeli flag was hoisted over the Dome of the Rock in 1967 during the Six-Day War, Israelis lowered it on the orders of Moshe Dayan and invested the Muslim waqf (religious trust) with the authority to manage the Temple Mount / Haram al-Sharif, in order to "keep the peace".

In 1993, the golden dome covering was refurbished following a donation of USD 8.2 million by King Hussein of Jordan who sold one of his houses in London to fund the 80 kilograms of gold required.

The Dome of the Rock is depicted on the reverse of the Iranian 1000 rials banknote.

The Dome is maintained by the Ministry of Awqaf in Amman, Jordan.

Some Orthodox rabbis encourage Jews to visit the site, while most forbid entry to the compound lest there be a violation of Jewish law. Even rabbis who encourage entrance to the Temple Mount prohibit entrance to the actual Dome of the Rock. 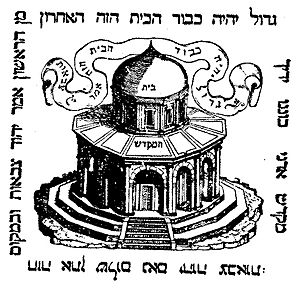 The Temple in Jerusalem depicted as the Dome of the Rock on the printer's mark of Marco Antonio Giustiniani, Venice 1545–52

Muslims believe the location of the Dome of the Rock to be the site mentioned in Sura 17 of the Qur'an, which tells the story of the Isra and Mi'raj, the miraculous Night Journey of Prophet Muhammad from Mecca to "the farthest mosque", where he leads prayers and rises to heaven to receive instructions from Allah. The Night Journey is mentioned in the Qur'an in a very brief form and is further elaborated by the hadiths. Caliph Umar ibn Al-Khattab (579–644) was advised by Ka'ab al-Ahbar, a Jewish rabbi who converted to Islam, that "the farthest mosque" is identical with the site of the former Jewish Temples in Jerusalem. 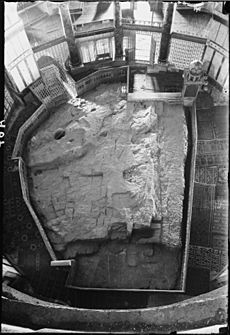 The Foundation Stone viewed from the dome. Photograph was taken between 1900 and 1920, before the removal of the surrounding iron grill.

The Foundation Stone and its surroundings is the holiest site in Judaism. Though Muslims now pray towards the Kaaba at Mecca, they once[year needed] faced the Temple Mount as the Jews do. Muhammad changed the direction of prayer for Muslims after a revelation from Allah. Jews traditionally regarded[year needed] the location of the stone as the holiest spot on Earth, the site of the Holy of Holies during the Temple Period.

According to Jewish tradition, the stone is the site where Abraham prepared to sacrifice his son Isaac.

On the walls of the Dome of the Rock is an inscription in a mosaic frieze that includes an explicit rejection of the divinity of Christ, from Quran (19:33–35):

33. "So peace is upon me the day I was born, and the day I die, and the day I shall be raised alive!" 34. Such is Jesus, son of Mary. It is a statement of truth, about which they doubt. 35. It is not befitting to (the majesty of) Allah that He should take himself a child. Glory be to Him! when He determines a matter, He only says to it, "Be", and it is.

According to Goitein, the inscriptions decorating the interior clearly display a spirit of polemic against Christianity, whilst stressing at the same time the Qur'anic doctrine that Jesus was a true prophet. The formula la sharika lahu ("God has no companion") is repeated five times; the verses from Sura Maryam 19:35–37, which strongly reaffirm Jesus' prophethood to God, are quoted together with the prayer: Allahumma salli ala rasulika wa'abdika 'Isa bin Maryam – "O Lord, send your blessings to your Prophet and Servant Jesus son of Mary." He believes that this shows that rivalry with Christendom, together with the spirit of Muslim mission to the Christians, was at work at the time of construction.

Groups such as the Temple Mount and Eretz Yisrael Faithful Movement wish to relocate the Dome to Mecca and replace it with a Third Temple. Many Israelis are ambivalent about the Movement's wishes. Some religious Jews, following rabbinic teaching, believe that the Temple should only be rebuilt in the messianic era, and that it would be presumptuous of people to force God's hand. However, some Evangelical Christians consider rebuilding of the Temple to be a prerequisite to Armageddon and the Second Coming. Jeremy Gimpel, a US-born candidate for Habayit Hayehudi in the 2013 Israeli elections, caused a controversy when he was recorded telling a Fellowship Church evangelical group in Florida in 2011 to imagine the incredible experience that would follow were the Dome to be destroyed. All Christians would be immediately transported to Israel, he opined.

All content from Kiddle encyclopedia articles (including the article images and facts) can be freely used under Attribution-ShareAlike license, unless stated otherwise. Cite this article:
Dome of the Rock Facts for Kids. Kiddle Encyclopedia.