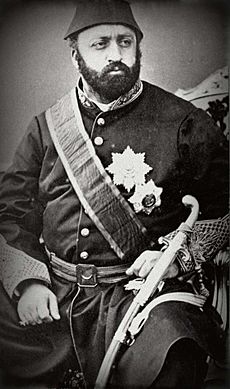 Sultan Abdülaziz of the Ottoman Empire

Abdülaziz (Ottoman Turkish: عبد العزيز) ( February 1830 – 4 June 1876) was the 32nd Sultan of the Ottoman Empire and was 111st Caliph of Islam. He ascended the throne when he was 31 years old, reigned between 25 June 1861 and 30 May 1876. He was the son of Sultan Mahmud II and became sultan after the death of his brother Abdülmecid I. He was deposed in 1876, having become unpopular, and was found dead six days later.

Abdülaziz was fond of wrestling, hunting and arm wrestling. He expanded and modernized the Ottoman Navy, making it the third largest in the world. This resulted in large debts to European countries. He also bought modern weapons for the Ottoman Army and expanded it.

Sultan Abdülaziz frequently organized trips to inland and out of country. He was first Sultan who visited Egypt after Yavuz Sultan Selim that conqueared Egypt.

As well as principalities Abdülaziz was first Sultan that visits Europe often. And often contacted with other countries leaders.

In peroid of Abülaziz Ottomans pay attention to get along with West. Ottoman's westernization politics that come from Edict Of Gülhane continued.

This is the Abülaziz's a few innovation during his 15 years reign.

The descendants of Abdulaziz have her own throne succession arrangements

Only male descendants of Abdulaziz are considered representatives of the former Ottoman throne.

All content from Kiddle encyclopedia articles (including the article images and facts) can be freely used under Attribution-ShareAlike license, unless stated otherwise. Cite this article:
Abdülaziz Facts for Kids. Kiddle Encyclopedia.