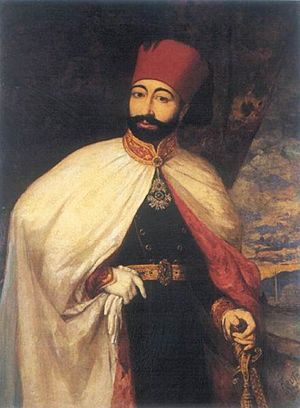 Mahmud II (Ottoman Turkish: محمود ثاني Mahmud-ı sānī) (July 20, 1785 – July 1, 1839) was the 30th Sultan of the Ottoman Empire. He ruled from 1808 until his death. Mahmud was the son of Sultan Abdül Hamid I. His time as sultan is notable mostly for the major legal and military changes he caused.

Mahmud II was born in Istanbul. He was 23 years old wheb he came to the throne. He was a calligraphy artist, composer and poet. He wrote poems under the pseudonym "Adli". He was a brave, strong will, patient and prudent temperament. He replaced the old military organization maintained by the governors of irregular auxiliaries (sekban - I Cedid). When the soldiers shortly after arose, he defeated them with this. The 1808 revolting insurgents killed Alemdar Mustafa Pasha.

In 1812 the peace treaty was signed in Bucharest with the Russians. In 1813, with the help of Muhammed Ali Pasha, he defeated the Wahhabis, who desecrated the holy places and shrines in Mecca and Medina.

In July of 1839 the Sultan Mahmud II died as the ill effects of life experienced by him calamitous events he was afflicted with tuberculosis and died. His body was buried in the Türbe in Divanyolu. Mahmud II was devoted to many works of the highest degree in any field. He opened many new schools, and ordered to build large buildings. All the great mosques of Istanbul were repaired in his time. The bridge was built in Unkapani his time. In Mecca, he had built a madrasa and mend the Great Mosque (Mescid-i Aksa) in the holy city of Jerusalem. The poet and Sümbülzâde Vehbi Kececizâde Izzet Molla died at this time.

All content from Kiddle encyclopedia articles (including the article images and facts) can be freely used under Attribution-ShareAlike license, unless stated otherwise. Cite this article:
Mahmud II Facts for Kids. Kiddle Encyclopedia.