Ibrahim Pasha (Turkish: Kavalalı İbrahim Paşa; Arabic: إبراهيم باشا‎code: ar is deprecated Ibrāhīm Bāshā; 1789 – November 10, 1848) was the eldest son of Muhammad Ali, the Wāli and unrecognised Khedive of Egypt and Sudan. He served as a general in the Egyptian army that his father established during his reign, taking his first command of Egyptian forces when he was merely a teenager. In the final year of his life, he succeeded his still living father as ruler of Egypt and Sudan, due to the latter's ill health. His rule also extended over the other dominions that his father had brought under Egyptian rule, namely Syria, Hejaz, Morea, Thasos, and Crete. Ibrahim pre-deceased his father, dying 10 November 1848, only four months after acceding to the throne. Upon his father's death the following year, the Egyptian throne passed to Ibrahim's nephew (son of Muhammad Ali's second oldest son), Abbas.

Ibrahim remains one of the most celebrated members of the Muhammad Ali dynasty, particularly for his impressive military victories, including several crushing defeats of the Ottoman Empire. Among Egyptian historians, Ibrahim, his father Muhammad Ali, and his son Ismail the Magnificent are held in far higher esteem than other rulers from the dynasty, who were largely viewed as indolent and corrupt; this is largely the result of efforts by his grandson Fuad I of Egypt to ensure the positive portrayal of his paternal ancestors in the Royal Archives that he created, which were the primary source for Egyptian history from the 1920s until the 1970s. Today, a statue of Ibrahim occupies a prominent position in Egypt's capital, Cairo.

His mother Emine, born at Nusretli in 1770 and died in Cairo 1824. She was the widow of Ottoman official Serezli Ali Bey, and a daughter of the Ottoman Albanian Major Ali Aga of Nusretli. Ibrahim was her first born son with Muhammad Ali of Egypt (her first born was Princess Tawhida). It is further known that he was born in the village of Nusratli (today Nikiforos), near the town of Drama, the Ottoman province of Rumelia, in what is now the eastern parts of Macedonian region in Greece

In 1805, during his father's struggle to establish himself as ruler of Egypt, the adolescent Ibrahim, at 16, was sent as a hostage to the Ottoman captain Pasha. However, Ibrahim was allowed to return to Egypt once his father was recognised as Wāli of Egypt by the Ottoman Sultan, and had defeated the British military expedition of Major General Alexander Mackenzie Fraser.

When Muhammad Ali went to Arabia to prosecute the war against the Ibn Saud in 1813, Ibrahim was left in command of Upper Egypt. He continued the war with the broken power of the Mameluks, whom he suppressed. In 1816, he succeeded his brother Tusun Pasha in command of the Egyptian forces in Arabia.

Campaigns against the house of Saud

Muhammad Ali had already begun to introduce European discipline into his army, and Ibrahim had probably received some training, but his first campaign was conducted more in the old Asiatic style than his later operations. The campaign lasted two years, and ended in the destruction of the House of Saud as a political power. Muhammad Ali landed at Yanbu, the port of Medina, on 1813. The holy cities had been recovered from the Saudis, and Ibrahim's task was to follow them into the desert of Nejd and destroy their fortresses. Such training as the Egyptian troops had received, and their artillery, gave them a marked superiority in the open field. But the difficulty of crossing the desert to the Saudis stronghold of Diriyah, some 400 miles east of Medina made the conquest a very arduous one. Ibrahim displayed great energy and tenacity, sharing all the hardships of his army, and never allowing himself to be discouraged by failure. By the end of September 1818, he had forced the Saudi leader to surrender, and had taken Diriyah, which he sacked.

Operations in the Morea 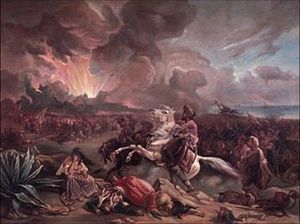 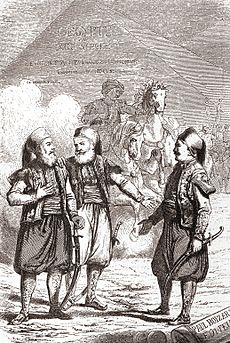 On December 11, 1819 he made a triumphal entry into Cairo. After his return Ibrahim gave effective support to the Frenchman, Colonel Sève (Suleiman Pasha), who was employed to drill the army on the European model. Ibrahim set an example by submitting to be drilled as a recruit. In 1824, Muhammad Ali was appointed governor of the Morea (the Peloponnese peninsula in southern Greece) by Ottoman Sultan Mahmud II. Mahmud actually required the assistance of the well-trained Egyptian army against the contemporary Greek Revolution, which his forces had been unable to quell: in 1822, the Greeks had decisively defeated an army of some 30,000 men under Sultanzade Mahmud Dramali Pasha.

Ibrahim was sent to the Peloponnese with a squadron and an army of 17,000 men. The expedition sailed on July 4, 1824, but was for some months unable to do more than come and go between Rhodes and Crete. The fear of the Greek fire ships stopped his way to the Morea. When the Greek sailors mutinied from want of pay, Ibrahim was able to land at Modon on February 26, 1825. He remained in the Morea until the capitulation of October 1, 1828 was forced on him by the intervention of the Western powers.

He defeated the Greeks in the open field, and though the siege of Missolonghi proved costly to his own troops and to the Ottoman forces who operated with him, he brought it to a successful termination on April 24, 1826. But he was defeated in Mani three times in a row. The Greek guerrilla bands harassed his army, and in revenge he desolated the country and sent thousands of the inhabitants into slavery in Egypt. These measures of repression aroused great indignation in Europe and led to the intervention of the naval squadrons of the United Kingdom, the Restored Kingdom of France and Imperial Russia in the Battle of Navarino (October 20, 1827). Their victory was followed by the landing of a French expeditionary force in the so-called Morea expedition. By the terms of the capitulation of October 1, 1828, Ibrahim evacuated the country.

In 1831, his father's quarrel with the Porte having become flagrant, Ibrahim was sent to conquer Syria. He took Acre after a severe siege on May 27, 1832, occupied Damascus, defeated an Ottoman army at Homs on July 8 defeated another Ottoman army at Beilan on July 29, invaded Asia Minor, and finally routed the Grand Vizier Reşid Mehmed Pasha at Konya on December 21. It was there in Syria where he met Umar Tal the mystic, according to accounts Umar Tal healed the son of Ibrahim Pasha from a deadly fever. Umar Tal was inspired by Ibrahim Pasha, when Umar returned to Sokoto he followed the trends set by the Pasha. Umar Tal later became the commander of the Toucouleur in what is now Guinea, Senegal, and Mali.

The Convention of Kütahya on May 6 left Syria for a time in the hands of Muhammad Ali. Ibrahim was undoubtedly helped by Colonel Sève and the European officers in his army. After the campaign of 1832 and 1833, Ibrahim remained as governor in Syria. He might perhaps have administered successfully, but the exactions he was compelled to enforce by his father soon caused the popularity of his government to decline and provoked revolts. He was assisted by French officer Beaufort d'Hautpoul from 1834 to 1837, who was his Chief-of-Staff.

During the 1834 peasants' revolt in Palestine, Ibrahim Pasha besieged the Transjordanian city of Al-Karak for 17 days, in pursuit of the revolt's leader Qasim al-Ahmad. After a hole was blasted into the town's walls in late August, Al-Karak was destroyed and the orchards outside the town were uprooted as punitive measures against the residents for hosting Qasim. Fearing further retaliation from Ibrahim Pasha, the rebel leaders were handed to the Egyptians.

In 1838, the Porte felt strong enough to renew the struggle, and war broke out once more. Ibrahim won his last victory for his father at Nezib on June 24, 1839. But the United Kingdom and the Austrian Empire intervened to preserve the integrity of the Ottoman Empire. Their squadrons cut his communications by sea with Egypt, a general revolt isolated him in Syria, and he was finally compelled to evacuate the country in February 1841.

The Karakis were to take their revenge from Ibrahim Pasha, 6 years later when the Pasha and his Egyptian army were driven out of Damascus. In 1841, as the Pasha and his troops took the Hajj road from Damascus, they were persistently attacked all the way from Qatraneh to Gaza. The weary army were killed and robbed, and by the time Ibrahim Pasha reached Gaza, the commander had lost most of his army, ammunition and animals.

Ibrahim spent the rest of his life in peace, but his health was ruined. In 1846 he paid a visit to Western Europe, where he was received with some respect and a great deal of curiosity. When his father became senile, Ibrahim was appointed Regent in his place. He held his regency from July till the time of his death on 10 November 1848.

All content from Kiddle encyclopedia articles (including the article images and facts) can be freely used under Attribution-ShareAlike license, unless stated otherwise. Cite this article:
Ibrahim Pasha of Egypt Facts for Kids. Kiddle Encyclopedia.