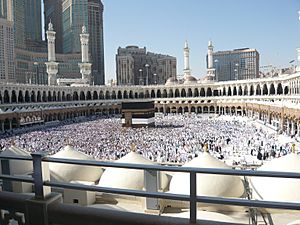 Al-Masjid Al-Haram, which surrounds the Ka‘bah (middle), in Mecca, land of Muhammad's birth and ancestry, and an annual point of pilgrimage for millions of people, 2010.

Hejaz is the western region of Saudi Arabia stretching along the Red Sea (Sea of Hejaz). It extends from Taif in the south to Khyber in the north.

There are four important cities in this region.

The largest city is Jeddah, in the middle of the Red Sea coast. Jeddah is the economic and tourism capital of the Kingdom of Saudi Arabia.

Mecca is the holy city for Muslims because of Al-Haram Mosque and Al-Kaaba. Muslims face this city when they pray.

The youngest city is Taif. Taif is a tourist city in Saudi Arabia due to the cooler climate compared with the other cities. Hejaz has spiritual, cultural, economic and tourist importance.

All content from Kiddle encyclopedia articles (including the article images and facts) can be freely used under Attribution-ShareAlike license, unless stated otherwise. Cite this article:
Hejaz Facts for Kids. Kiddle Encyclopedia.