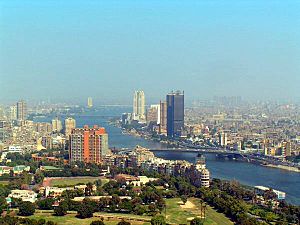 The town center of Cairo, seen from the Cairo tower. 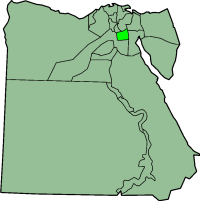 A map of Egypt. Cairo is the light green spot.

Cairo (Arabic: القاهرة‎code: ar is deprecated , usually transliterated as Al-Qāhirah) is the capital and largest city in Egypt. The city name can be translated as the one who won. Cairo is sometimes called "Mother of the World" (Um al Dunya).

The city is on the Nile River.

The area around the city was an important focal point of Ancient Egypt.

In 968, the Fatimids entered Egypt and they made Cairo the capital of their caliphate.

The Al Azhar mosque and university was made in 972. This became the world's oldest university. It is the most widely known seminary in the Islamic world. 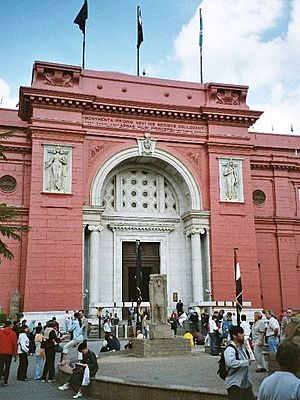 The great pyramids of Giza and the step pyramid of Sakkara are just outside of the city.

The Egyptian Museum holds the world’s largest collection of antiquities from the time of the ancient Pharaohs. Many treasures from the tomb of King Tutankhamun are in this museum.

People from Cairo are called 'Cairenes'.

All content from Kiddle encyclopedia articles (including the article images and facts) can be freely used under Attribution-ShareAlike license, unless stated otherwise. Cite this article:
Cairo Facts for Kids. Kiddle Encyclopedia.