Boutros Boutros-Ghali (بطرس بطرس غالى Buṭrus Buṭrus Ghālī ; 14 November 1922 – 16 February 2016) was an Egyptian politician and diplomat. He was the sixth Secretary-General of the United Nations (UN) from January 1992 to December 1996. 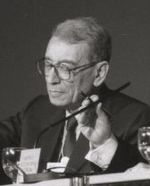 Boutros Boutros-Ghali, Secretary-General of the United Nations, at Davos in 1995.

Elected to the top post of the UN in 1991, Boutros-Ghali's term in office remains controversial. He was criticised for the UN's failure to act during the 1994 Rwandan Genocide, which officially left about 937,000 people dead, and he appeared unable to muster support in the UN for intervention in the continuing Angolan Civil War. One of the hardest periods for his office during his term was dealing with the crisis of the Yugoslav wars after the disintegration of former Yugoslavia. His reputation thus became entangled in the larger controversies over the effectiveness of the UN and the role of the United States in the UN. For his detractors, he came to symbolise the UN's alleged inaction in the face of humanitarian crises.

In 1996, ten Security Council members, led by African members Egypt, Guinea-Bissau and Botswana, sponsored a resolution backing Boutros-Ghali for a second five-year term, until 2001. However, the United States vetoed a second term for Boutros-Ghali. In addition to the United States, the United Kingdom, Poland, South Korea, and Italy did not sponsor this resolution, although all four of those nations voted in support of Boutros-Ghali after the US had firmly declared its intention to veto. Although not the first vetoed (China vetoed the third term of Kurt Waldheim in 1981), Boutros-Ghali was the first and only UN secretary-general not to be elected to a second term in office. He was succeeded at the UN by Kofi Annan.

US counter-terrorism czar Richard Clarke, Michael Sheehan, and Jamie Rubin participated in what they called "Operation Orient Express." From page 201 of Clarke's book Against All Enemies: "Albright and I and a handful of others (Michael Sheehan, Jamie Rubin) had entered into a pact together in 1996 to oust Boutros-Ghali as Secretary General of the United Nations, a secret plan we had called Operation Orient Express, reflecting our hope that many nations would join us in doing in the UN head. In the end, the US had to do it alone (with its UN veto) and Sheehan and I had to prevent the President from giving in to pressure from world leaders and extending Boutros-Ghali's tenure, often by our racing to the Oval Office when we were alerted that a head of state was telephoning the President. In the end Clinton was impressed that we had managed not only to oust Boutros-Ghali but to have Kofi Annan selected to replace him. (Clinton told Sheehan and me, 'Get me a crow, I should eat a crow, because I said you would never pull it off.')"

From 1997 to 2002 Boutros-Ghali was Secretary-General of La Francophonie, an organisation of French-speaking nations. From 2003 to 2006, he served as the Chairman of the Board of the South Centre, intergovernmental research organisation of developing countries. He was currently President of the Curatorium Administrative Council at the Hague Academy of International Law. In 2003 Boutros-Ghali was appointed as The Director of the Egyptian National Council of Human Rights.

From April 2007 Boutros-Ghali had supported the Campaign for the Establishment of a United Nations Parliamentary Assembly. He was one of the initial signers of the campaign's appeal. In a message to the campaign, he stressed the necessity to establish democratic participation at the global level.

Boutros-Ghali died on 16 February 2016 at a hospital in Cairo, Egypt after suffering from a broken pelvis. He was 93.

All content from Kiddle encyclopedia articles (including the article images and facts) can be freely used under Attribution-ShareAlike license, unless stated otherwise. Cite this article:
Boutros Boutros-Ghali Facts for Kids. Kiddle Encyclopedia.