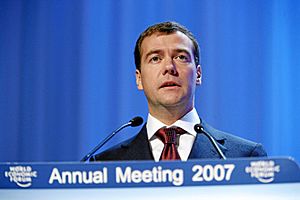 Dmitry Medvedev speaking at the Forum in 2007 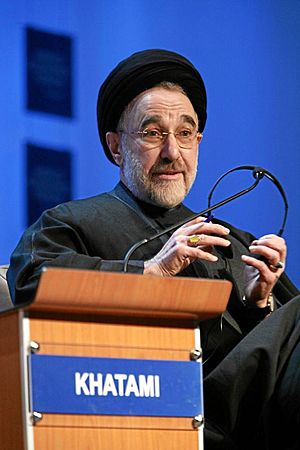 Mohammed Khatami at the Forum, also in 2007

The World Economic Forum is a foundation based in Geneva, Switzerland. It is known for holding a yearly meeting in Davos in the mountains of Graubünden. Important leaders from politics (such as presidents) and the economy are given an opportunity to talk about subjects that concern everyone. Very often, these subjects concern globalization. Usually the Swiss army helps secure the area.

These meetings are often critizised because they are seen as a vehicle to further capitalism in the world by anti-capitalists and supporters of antiglobalization. There is an organisation called Public Eye On Davos that organizes public information during the meeting. During the meetings, which invole the G8, access to the village of Davos is heavily controlled. A small demonstration happens every year in Davos during these meetings. This is one of the rights given by the Universal Declaration of Human Rights. Bigger demonstrations are normally in the other cities in Switzerland during the World Economic Forum.

All content from Kiddle encyclopedia articles (including the article images and facts) can be freely used under Attribution-ShareAlike license, unless stated otherwise. Cite this article:
World Economic Forum Facts for Kids. Kiddle Encyclopedia.