Fossil fuels are fuels that come from old life forms that decomposed over a long period of time. The three most important fossil fuels are coal, petroleum, and natural gas.

Oil and gas are hydrocarbons (molecules that have only hydrogen and carbon in them). Coal is mostly carbon. These fuels are called fossil fuels because they are dug up from underground. Coal mining digs up solid fuel; gas and oil wells bring up liquid fuel. Fossil fuel was not much used until the Middle Ages. Coal became the main kind of fuel with the Industrial Revolution.

Crude oil can be separated to make various fuels such as LPG, gasoline, kerosene, jet fuel, and diesel fuel. These substances are made by fractional distillation in an oil refinery. They are the main fuels in transportation. That means that they are burned in order to move cars, trucks, ships, airplanes, trains and even spacecraft. Without them, there wouldn't be much transport.

People also burn fossil fuels to heat their homes. They use coal less for this than they did long ago, because it makes things dirty. In many homes, people burn natural gas in a stove for cooking.

All fossil fuels come from the periods in Earth's history when the Earth had huge tropical forests. In those periods, plants lived, grew and died, faster than they decayed. In other words, they were times when much of the dead vegetation did not entirely decompose. Instead it became coal and related substances such as peat.

The times of the great wetlands which produced coal and peat were in the Upper Carboniferous (Pennsylvanian), continuing in the first part of the Permian; the Jurassic and Eocene periods. Virtually all the worlds' coal dates to those periods. 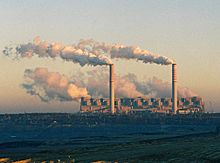 Most air pollution comes from burning fossil fuels. This can be reduced by making the combustion process more efficient, and by using various techniques to reduce the escape of harmful gases. This pollution is responsible for causing the earth to get warmer, called global warming. They are also non-renewable resources, there is only a limited amount of coal, gas, and oil, and it is not possible to make more. Eventually all the fossil fuels will be used. Some scientists think that coal will have run out by 2200 and oil by 2040.

Renewable energy sources like biomass energy such as firewood are being used. Countries are also increasing the use of wind power, tidal energy, and solar energy to generate electricity. Some governments are helping automobile makers to develop electric cars and hybrid cars that will use less oil.

All content from Kiddle encyclopedia articles (including the article images and facts) can be freely used under Attribution-ShareAlike license, unless stated otherwise. Cite this article:
Fossil fuel Facts for Kids. Kiddle Encyclopedia.