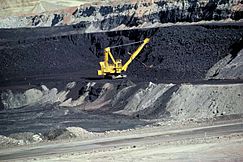 A coal mine in Wyoming. Coal, produced over millions of years, is harvested much more quickly than nature can renew it 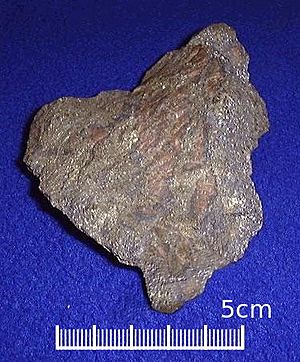 Raw gold ore that is eventually smelted down into gold metal.
For more details, see Mining

Earth minerals and metal ores are examples of non-renewable resources. The metals themselves are present in vast amounts in Earth's crust, and their extraction by humans only occurs where they are concentrated by natural geological processes (such as heat, pressure, organic activity, weathering and other processes) enough to become economically viable to extract. These processes generally take from tens of thousands to millions of years, through plate tectonics, tectonic subsidence and crustal recycling.

The localized deposits of metal ores near the surface which can be extracted economically by humans are non-renewable in human time-frames. There are certain rare earth minerals and elements that are more scarce and exhaustible than others. These are in high demand in manufacturing, particularly for the electronics industry.

Natural resources such as coal, petroleum (crude oil) and natural gas take thousands of years to form naturally and cannot be replaced as fast as they are being consumed. Eventually it is considered that fossil-based resources will become too costly to harvest and humanity will need to shift its reliance to other sources of energy such as solar or wind power, see renewable energy.

The modern-day fossil fuel economy is widely criticized for its lack of renewability, as well as being a contributor to climate change. 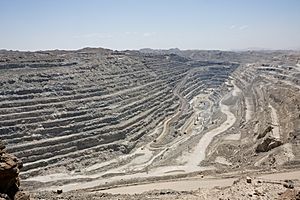 Rössing uranium mine is the longest-running and one of the largest open pit uranium mines in the world, in 2005 it produced eight percent of global uranium oxide needs(3,711 tons). The most productive mines however are the underground McArthur River uranium mine in Canada which produces 13% of the world's uranium, and the similarly underground poly-metallic Olympic Dam mine in Australia, which despite being largely a copper mine, contains the largest known reserve of uranium ore.
Main page: Nuclear fuel

In 1987, the World Commission on Environment and Development (WCED) classified fission reactors that produce more fissile nuclear fuel than they consume (i.e. breeder reactors) among conventional renewable energy sources, such as solar and falling water. The American Petroleum Institute likewise does not consider conventional nuclear fission as renewable, but rather that breeder reactor nuclear power fuel is considered renewable and sustainable, noting that radioactive waste from used spent fuel rods remains radioactive and so has to be very carefully stored for several hundred years. With the careful monitoring of radioactive waste products also being required upon the use of other renewable energy sources, such as geothermal energy.

Land surface can be considered both renewable and non-renewable resource. Land can be reused but new land cannot be created. 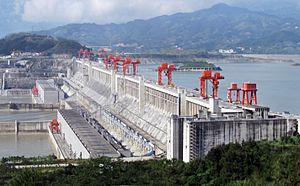 The Three Gorges Dam, the largest renewable energy generating station in the world.

Natural resources, known as renewable resources, are replaced by natural processes and forces persistent in the natural environment.

The production of goods and services by manufacturing products in economic systems creates many types of waste during production and after the consumer has made use of it. The material is then either incinerated, buried in a landfill or recycled for reuse.

In the natural environment water, forests, plants and animals are all renewable resources, as long as they are adequately monitored, protected and conserved. Sustainable agriculture is the cultivation of plant and animal materials in a manner that preserves plant and animal ecosystems and that can improve soil health and soil fertility over the long term. The overfishing of the oceans is one example of where an industry practice or method can threaten an ecosystem, endanger species and possibly even determine whether or not a fishery is sustainable for use by humans. An unregulated industry practice or method can lead to a complete resource depletion.

The renewable energy from the sun, wind, wave, biomass and geothermal energies are based on renewable resources. Renewable resources such as the movement of water (hydropower, tidal power and wave power), wind and radiant energy from geothermal heat (used for geothermal power) and solar energy (used for solar power) are practically infinite and cannot be depleted, unlike their non-renewable counterparts, which are likely to run out if not used sparingly.

All content from Kiddle encyclopedia articles (including the article images and facts) can be freely used under Attribution-ShareAlike license, unless stated otherwise. Cite this article:
Non-renewable resource Facts for Kids. Kiddle Encyclopedia.