A map of the Three Gorges Dam and reservoir

The Three Gorges Dam (Chinese: 长江三峡大坝) is a dam in the Three Gorges region on the Yangtze River in Sandouping, in the country of China. Being one of the largest dams in the world, it also generates the biggest amount of hydroelectric power (22,250 megawatts), pushing the massive Itaipu Dam in Brazil from first place to second place.

The Three Gorges Dam project was completed on July 4, 2012. The dam was built for flood control, irrigation, and electricity. However, this has not come without problems. The dam covers a lot of historic sites and has caused 1.24 million people to lose their homes under the rising water. The dam forms the Three Gorges Reservoir, which extends nearly 410 mi (660 km) upstream to the city of Chongqing. 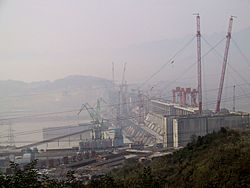 Construction of the dam.

The dam was proposed by Sun Yat-sen, a Chinese political leader, in 1919. The site was surveyed in 1932 and 1939, by the Chinese and Japanese respectively. The Japanese drew up a plan (the Otani plan) for the dam, only to realize later that China would remain under Chinese control. Later, in 1944, the United States helped make plans for the dam, but all work on the dam stopped in 1947, because of the Chinese Civil War. In 1949, work resumed, but the work was slow because of problems in the economy. Later in 1958, some engineers who were against the dam were put in jail.

In 1980, work on the dam continued faster. The National People's Congress voted in 1992 for the dam. The dam was accepted by the government, and on December 14, 1994, construction began. In 2009, the dam began to make hydroelectricity. Some new plans, such as a set of 6 new power generators under construction, became operational in the year 2011. The reservoir filled to capacity at the end of 2008. 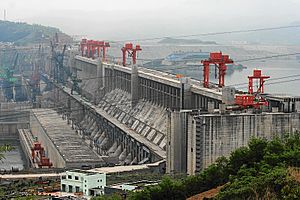 Part of the Three Gorges Dam

The Three Gorges Dam consists of a main dam wall, and a section on the right with a set of five locks, which are devices used to raise boats and ships.

A model of the spillways of the Three Gorges Dam, used to remove floodwater from the reservoir.

One of the big reasons the dam was built to control floods. It protects large cities like Wuhan, Nanjing, and Shanghai, which are very close to the river. Lots of farms, small villages and towns, and factories are also located near the river. In the event of a flood, there are 22 cubic kilometers (18 million acre feet) of space behind the dam to hold back the flood waters. The flood waters are stored behind the dam for future use. In the dry season, the water is released down the river, and the reservoir level drops to prepare for the next flood. However, the dam does not protect the lower river tributaries from flooding. 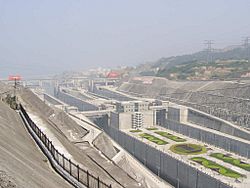 The navigation locks of the Three Gorges Dam.

Another reason the dam was built was for water navigation, or the transport of people and goods by ship. There are two sets of locks each of which has five stages. Each lock is 918 feet (280 m) long, 114 feet (35 m) wide, and 16.4 feet (5.0 m) deep, which is similar in size to the original locks of the Panama Canal, one of the biggest canals in the world. The reservoir behind the dam floods dangerous sections of the river, so boats and ships can go safely and easily. There is also a "ship lift" (an elevator for ships) that can lift ships that weigh up to 3,000 tons. 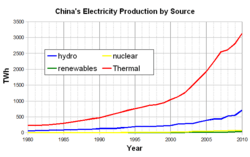 Of the 32 main generators, 14 generators are on the north side of the dam. 12 are on the south side of the dam. 6 are in a separate powerhouse under a mountain just south of the dam. The generating capacity of the dam is 10,000 MWh (megawatt-hours), or the amount of megawatts generated per hour. Each main generator weighs a massive 6000 tons (about the same weight as three thousand cars). The water drops 264 feet (80 m) from the reservoir to the generator, which uses a type of turbine called a Francis turbine. Each turbine is 34 feet (10 m) wide and 32 feet (9.8 m) tall. The amount of water that goes into the turbine can be from 1,968 cubic feet (600 m3) to 3,116 cubic feet (950 m3) per second. The turbines turn at a speed of 75 RPM (rotations per minute). The efficiency of the generators is from 94 to 96.5 percent.

From its completion to March 2009, the Three Gorges Dam has generated about 296,550,000 MWh (Megawatt-hours) of electricity. 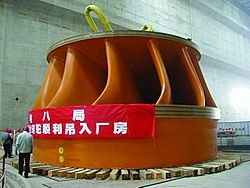 One of the giant turbines in the Three Gorges Dam.

Benefits of the dam 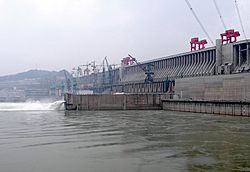 The Three Gorges Dam nearing completion, looking at its downstream side.

Because of reducing electricity needs on fossil fuels like coal and oil, the Three Gorges Dam has saved 31 million tons of coal per year, and prevented:

The dam has also benefited transportation on the river. Because of the locks (devices used to lift ships) installed on the dam, the benefits are:

In response to the dam, many sewage pipes that once dumped sewage straight into the Yangtze River now have to be treated. Over 65 percent of this waste water is now treated before flowing into the reservoir. There are now about 50 water treatment facilities in the area. Also, solid waste is now collected in 32 landfills. They can handle 7,664.5 tons of waste every day.

The dam also persuaded the government of China to think seriously about the pollution in the Yangtze River and the rest of China.

Disadvantages of the dam

A total of 1.24 million people had to move to different places because their homes were flooded by the dam. This number is about 1.5% of the total population of Hubei Province (60.3 million) and Chongqing City (31.44 million) where the reservoir is located. 140,000 from Hubei Province alone. On July 22, 2008, most of the people were safely relocated. 4 million more people will ultimately have to move to Chongqing from their homes near the Three Gorges Dam.

A large amount of animal habitat has also been destroyed. Many animals with critically low populations have lost their vital habitat. These include the endangered Siberian Crane, the Yangtze river dolphin (baiji), and Yangtze sturgeon. About one billion tons of dirty water flow into the Yangtze River each year. The dam has stopped this dirty water from being washed away to Shanghai, and led to serious pollution problems. 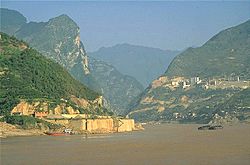 The scenic Three Gorges area is now partially flooded by the reservoir.

The Three Gorges Dam will become much less spectacular, because the water level will rise up to 300 feet (91 m) in places, reducing the depth of the canyons.

A lot of silt (sediment) that is carried by the river has been trapped in the reservoir. Eventually, if the dam is not removed, the reservoir will fill with silt, making it useless. Also, because the river's silt doesn't go downstream anymore, the city of Shanghai will suffer because there has been no silt to replace land that is washed away at the river's mouth. In a high-silt content river like the Yangtze, sediment can clog the dam's outlets, and it cannot release water. The water would back up behind the dam and have nowhere to go, and would eventually go over the dam, making it collapse.

The dam is also a possible target in war, weakening China's national security. It is also possible that the dam sits on a seismic fault. 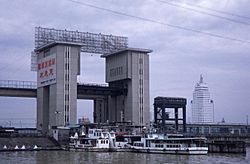 Part of the Gezhouba Dam. 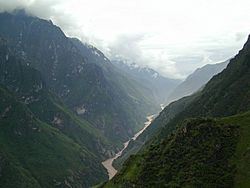 The Tiger Leaping Gorge was the planned location for a dam, but the plan was scrapped in late 2007.

A series of other dams are also planned upstream, on the Yangtze and Jinsha rivers. About four dams are planned on the stretch of the Yangtze River, and they will produce 38,500 megawatts in total. Eight dams are planned on the Jinsha River, and eight more upstream of it, and one original plan called for a dam in the Tiger Leaping Gorge, one of the deepest river canyons in the world. This plan was, however, scrapped in December 21, 2007, because of the gorge's status as a World Heritage site.

All content from Kiddle encyclopedia articles (including the article images and facts) can be freely used under Attribution-ShareAlike license, unless stated otherwise. Cite this article:
Three Gorges Dam Facts for Kids. Kiddle Encyclopedia.