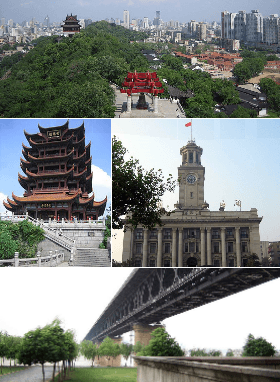 Wuhan (Chinese: 武汉) is the capital of Hubei province, People's Republic of China, and is the city with most people in Central China. It is at the east of the Jianghan Plain, where the Yangtze and Han rivers meet. Joining three nearby cities, Wuchang, Hankou, and Hanyang, Wuhan is a center of transportation, with many railways, roads and expressways passing through. Because of its important role in transportation, Wuhan was sometimes called the "Chicago of China." It is also recognized as the political, economic, financial, cultural, and educational center of central China.

In December 2019, the COVID-19 pandemic started in Wuhan.

All content from Kiddle encyclopedia articles (including the article images and facts) can be freely used under Attribution-ShareAlike license, unless stated otherwise. Cite this article:
Wuhan Facts for Kids. Kiddle Encyclopedia.