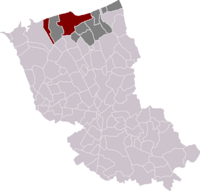 Location of Dunkirk in the arrondissement of Dunkirk. 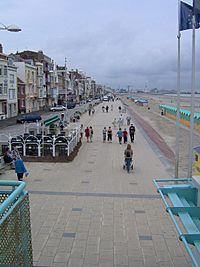 Dunkirk (French: Dunkerque, pronounced or Dutch: Duinkerke or Duinkerken) is a harbour city in the northernmost part of France, 10 km (6 mi) from the Belgian border.

Until the middle of the 20th century the city was in the Dutch language area; today the local Dutch dialect still can be heard but has largely given way to French. 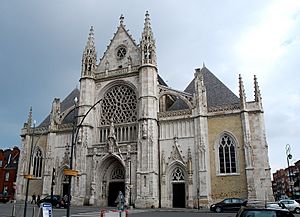 A fishing village arose late in the tenth century, in the originally flooded coastal area of the English Channel south of the Western Scheldt, when the area was held by the Counts of Flanders, vassals of the French Crown. About 960AD, Count Baldwin III had a town wall erected in order to protect the settlement against Viking raids. The surrounding wetlands were drained and cultivated by the monks of nearby Bergues Abbey. The name Dunkirka was first mentioned in a tithe privilege of 27 May 1067, issued by Count Baldwin V of Flanders. Count Philip I (1157–1191) brought further large tracts of marshland under cultivation, laid out the first plans to build a Canal from Dunkirk to Bergues and vested the Dunkirkers with market rights.

In the late 13th century, when the Dampierre count Guy of Flanders entered into the Franco-Flemish War with his suzerain King Philippe IV of France, the citizens of Dunkirk sided with the French against their count, who at first was defeated at the 1297 Battle of Furnes, but reached de facto autonomy upon the victorious Battle of the Golden Spurs five years later and exacted vengeance. Guy's son, Count Robert III (1305–1322), nevertheless granted further city rights to Dunkirk; his successor Count Louis I (1322–1346) had to face the Peasant revolt of 1323–1328, which was crushed by King Philippe VI of France at the 1328 Battle of Cassel, whereafter the Dunkirkers again were affected by the repressive measures of their lord-paramount.

Count Louis remained a loyal liensman of the French king upon the outbreak of the Hundred Years' War with England in 1337, and prohibited the maritime trade, which led to another revolt by the Dunkirk citizens. After the count had been killed in the 1346 Battle of Crécy, his son and successor Count Louis II of Flanders (1346 – 1384) signed a truce with the English; the trade again flourished and the port was significantly enlarged. However, in the course of the Western Schism from 1378, English supporters of Pope Urban VI (the Roman claimant) disembarked at Dunkirk, captured the city and flooded the surrounding estates. They were ejected by King Charles VI of France, but left great devastations in and around the town.

Upon the extinction of the Counts of Flanders with the death of Louis II in 1384, Flanders was acquired by the Burgundian, Duke Philip the Bold. The fortifications were again enlarged, including the construction of a belfry daymark. As a strategic point, Dunkirk has always been exposed to political covetousness, by Duke Robert I of Bar in 1395, by Louis de Luxembourg in 1435 and finally by the Austrian archduke Maximilian I of Habsburg, who in 1477 married Mary of Burgundy, sole heiress of late Duke Charles the Bold. As Maximilian was the son of Emperor Frederick III, all Flanders was immediately seized by King Louis XI of France. However, the archduke defeated the French troops in 1479 at the Battle of Guinegate. When Mary died in 1482, Maximilian retained Flanders according to the terms of the 1482 Treaty of Arras. Dunkirk, along with the rest of Flanders, was incorporated into the Habsburg Netherlands and upon the 1581 secession of the Seven United Netherlands, remained part of the Southern Netherlands, which were held by Habsburg Spain (Spanish Netherlands) as Imperial fiefs. 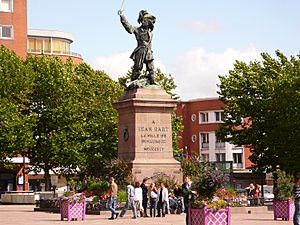 Statue of Jean Bart in Dunkirk, the most famous corsair of the city.

The area remained much disputed between the Kingdom of Spain, the United Netherlands, the Kingdom of England and the Kingdom of France. At the beginning of the Eighty Years' War, Dunkirk was briefly in the hands of the Dutch rebels, from 1577. Spanish forces under Duke Alexander Farnese of Parma re-established Spanish rule in 1583 and it became a base for the notorious Dunkirkers. The Dunkirkers briefly lost their home port when the city was conquered by the French in 1646 but Spanish forces recaptured the city in 1652. In 1658, as a result of the long war between France and Spain, it was captured after a siege by Franco-English forces following the battle of the Dunes. The city along with Fort-Mardyck was awarded to England in the peace the following year as agreed in the Franco-English alliance against Spain.

It came under French rule when King Charles II of England sold it to France for £320,000 on 17 October 1662. The French government developed the town as a fortified port. The town's existing defences were adapted to create ten bastions. The port was expanded in the 1670s by the construction of a basin that could hold up to thirty warships with a double lock system to maintain water levels at low tide. The basin was linked to the sea by a channel dug through coastal sandbanks secured by two jetties. This work was completed by 1678. The jetties were defended a few years later by the construction of five forts, Château d'Espérance, Château Vert, Grand Risban, Château Gaillard, and Fort de Revers. An additional fort was built in 1701 called Fort Blanc. The jetties, their forts, and the port facilities were demolished in 1713 under the terms of the Treaty of Utrecht.

During the reign of King Louis XIV, a large number of commerce raiders once again made their base at Dunkirk. Jean Bart was the most famous. The main character (and possible real prisoner) in the famous novel Man in the Iron Mask by Alexandre Dumas was arrested at Dunkirk. The eighteenth-century Swedish privateers and pirates Lars Gathenhielm and his wife Ingela Hammar, are known to have sold their ill-gotten gains in Dunkirk. The Treaty of Paris (1763) between France and Great Britain ending the Seven Years War (1756-1763), included a clause restricting French rights to fortify Dunkirk, to allay British fears of it being used as an invasion base to cross the English Channel.

Dunkirk in World War I

In January, 1916, spy hysteria broke out in Dunkirk. The writer Robert W. Service, then a war correspondent for the Toronto Star, was mistakenly arrested as a spy and narrowly avoided being executed out of hand. On 1 January 1918, the United States Navy established a naval air station to operate seaplanes during the First World War (1914–1918). The base closed shortly after the Armistice of 11 November 1918.

During the war, Dunkirk was heavily attacked by the largest gun of the world, the German 'Lange Max'. On a regular basis, heavy shells weighing approximately 750kg were fired from Koekelare (Belgium) to Dunkirk, which is about ±45 - 50km away. 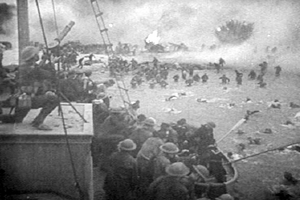 British troops retreating from Dunkirk in 1940.

During the Second World War (1939–1945), in the May 1940 Battle of France, the British Expeditionary Force (BEF) in France aiding the French were cut off from the rest of the French Army by the German advance. Encircled by the Germans, they retreated to the area around the port of Dunkirk. For years, it was assumed that Adolf Hitler ordered the German Army to stop the attack, favouring bombardment by the Luftwaffe. However, according to the Official War Diary of Army Group A, its commander, Generaloberst Gerd von Rundstedt, ordered the halt. Hitler merely validated the order several hours after the fact. This lull in the action gave the British a few days to evacuate by sea and fortify defences. Winston Churchill, the British Prime Minister, ordered any ship or boat available, large or small, to collect the stranded soldiers. 338,226 men (including 123,000 French soldiers) were evacuated – the miracle of Dunkirk, as Churchill called it. It took over 900 vessels to evacuate the BEF, with two-thirds of those rescued embarking via the harbour, and over 100,000 taken off the beaches. More than 40,000 vehicles as well as massive amounts of other military equipment and supplies were left behind, their value being regarded as less than that of trained fighting men. The British evacuation of Dunkirk through the English Channel was codenamed Operation Dynamo. Forty thousand Allied soldiers (some who carried on fighting after the official evacuation) were captured or forced to make their own way home through a variety of routes including via neutral Spain. 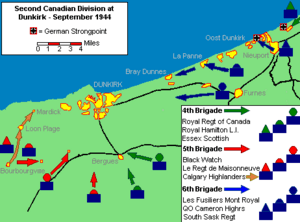 Map of Dunkirk surroundings, during the Allied attempt to re-take Dunkirk in 1944.

The city was again contested in 1944, with the 2nd Canadian Infantry Division attempting to liberate the city in September, as Allied forces surged northeast after their victory in the Battle of Normandy. However, German forces refused to relinquish their control of the city, which had been converted into a fortress. The German garrison there was "masked" by Allied troops, notably 1st Czechoslovak Armoured Brigade. During the German occupation, Dunkirk was largely destroyed by Allied bombings. The artillery siege of Dunkirk was directed on the final day of the war by pilots from No. 652 Squadron RAF, and No. 665 Squadron RCAF. The fortress under command of German Admiral Friedrich Frisius eventually unconditionally surrendered to the commander of the Czechoslovak forces, Brigade General Alois Liška, on 9 May 1945.

Dunkirk has an oceanic climate, with cool winters and warm summers. According to the Köppen Climate Classification system, Dunkirk has a marine west coast climate, abbreviated "Cfb" on climate maps. Summers are averaging around 21 °C (70 °F), being significantly influenced by the marine currents.

Dunkirk has the third-largest harbour in France, after those of Le Havre and Marseille. As an industrial city it depends heavily on the steel, food processing, oil-refining, ship-building and chemical industries.

The cuisine of Dunkirk closely resembles Flemish cuisine; perhaps one of the best known dishes is coq à la bière – chicken in a creamy beer sauce. 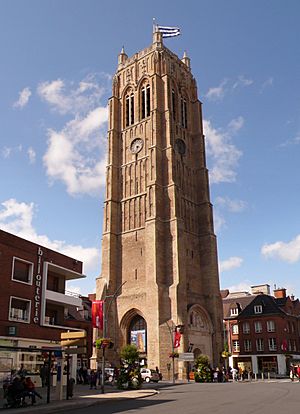 In June 1792 the French astronomers Jean Baptiste Joseph Delambre and Pierre François André Méchain set out to measure the meridian arc distance from Dunkirk to Barcelona, two cities lying on approximately the same longitude as each other and also the longitude through Paris. The belfry was chosen as the reference point in Dunkirk.

Using this measurement and the latitudes of the two cities they could calculate the distance between the North Pole and the Equator in classical French units of length and hence produce the first prototype metre which was defined as being one ten millionth of that distance. The definitive metre bar, manufactured from platinum, was presented to the French legislative assembly on 22 June 1799.

Dunkirk was the most easterly cross-channel measuring point for the Anglo-French Survey (1784–1790), which used trigonometry to calculate the precise distance between the Paris Observatory and the Royal Greenwich Observatory. Sightings were made of signal lights at Dover Castle from the Dunkirk Belfry, and vice versa.

Dunkirk has a ferry connection which does not accept foot passengers with Dover, England. The Gare de Dunkerque railway station offers connections to Gare de Calais-Ville, Gare de Lille Flandres, Arras and Paris, and several regional destinations in France. The railway line from Dunkirk to De Panne and Adinkerke, Belgium, shown on major on-line maps, is not used by passenger trains.

Foot passengers have to go to Gare de Calais-Ville for a connection on P&O Ferries to reach Dover.

All content from Kiddle encyclopedia articles (including the article images and facts) can be freely used under Attribution-ShareAlike license, unless stated otherwise. Cite this article:
Dunkirk Facts for Kids. Kiddle Encyclopedia.