Qinhuangdao (秦皇岛) is a city in the north of China. The name in Chinese means "island of the Qin Emperor" or "Emperor Qin's island", since it was where Emperor Qin Shi Huang sent men to search for immortals, or living beings who cannot die or grow old, across the sea. It is in Hebei Province. It is about 300 kilometres (190 mi) east of Beijing, on the Bohai Sea. The city had 2,987,605 people as of 2010. Qinhuangdao is one of fourteen coastal open cities, which are important foreign trade ports in north China. It was approved as a national grade tourist city by the State Council. Famous scenic spots include Shanhaiguan and Beidaihe. Qinhuangdao City is a state-level economic and technological development zone of Qinhuangdao. 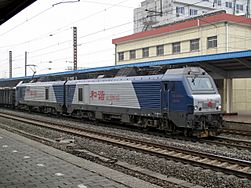 This is the train in Qinhuangdao.

Qinhuangdao Shanhaiguan Airport has flights from Shijiazhuang, Wuhan and Shanghai.

Qinhuangdao's Port is one of China's bigger energy output ports. It is one of the major ports where China's Shanxi Coal can go to other countries. It is a natural, ice-free harbor.

Yanshan University and the Hebei Institute of International Business and Economics (HIIBE) is in Qinhuangdao.

All content from Kiddle encyclopedia articles (including the article images and facts) can be freely used under Attribution-ShareAlike license, unless stated otherwise. Cite this article:
Qinhuangdao Facts for Kids. Kiddle Encyclopedia.