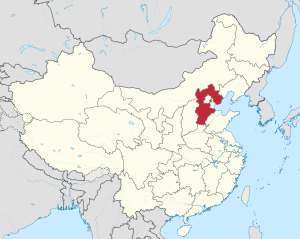 Hebei (Hanzi:河北 ; pinyin: Héběi) is a province in China that wraps around the cities of Beijing and Tianjin, two of China's four "municipalities". The name Hebei means "North of the (Yellow) River" in Chinese. It was formed in 1928 after the central government dissolved Chihli province. The old name, Chihli or Zhili, which means "directly administered" referred to its status under the Qing dynasty. Hebei province borders Liaoning province on the northeast. On the north it borders Inner Mongolia. To the west it borders Shanxi province. It borders the provinces of Henan to the south and Shandong to the southwest. Shijiazhuang is the capital of the province.

The abbreviated name of Hebei is Ji (冀), since there is another province that also has the syllable "He" (河) in it, Henan (河南). Due to Hebei completely surrounding Beijing and Tianjin, the municipalities of Beijing and Tianjin and the province of Hebei are often lumped together and called Jingjinji, with the "Jing" being Beijing, the "Jin" being Tianjin, and the "Ji" being the abbreviation of Hebei.

All content from Kiddle encyclopedia articles (including the article images and facts) can be freely used under Attribution-ShareAlike license, unless stated otherwise. Cite this article:
Hebei Facts for Kids. Kiddle Encyclopedia.