The North China Plain is the area surrounding the lower Yellow River and its Tributaries, as well as the empty steppe to the North. 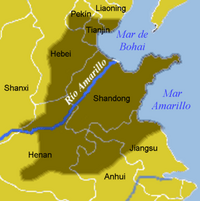 The North China Plain is shown in dark. The Yellow River is shown as "Río Amarillo".

The North China Plain (Chinese: 華北平原; pinyin: Huáběi Píngyuán) is a large-scale downfaulted rift basin formed in late Paleogene and Neogene and then modified by the deposits of the Yellow River and is the largest alluvial plain of China. The plain is bordered to the north by the Yanshan Mountains, to the west by the Taihang Mountains, to the south by the Dabie and Tianmu Mountains, and to the east by the Yellow Sea. The Yellow River flows through the middle of the plain into the Bohai Sea.

Below the Sanmenxia Dam is the multipurpose Xiaolangdi Dam, located in the river's last valley before the North China Plain, a great delta created from silt dropped at the Yellow River's mouth over the millennia. The North China Plain extends over much of Henan, Hebei, and Shandong provinces. and merges with the Yangtze Delta in northern Jiangsu and Anhui provinces. The Yellow River meanders over the fertile, densely populated plain emptying into the Bohai Sea. The plain is one of China's most important agricultural regions, producing corn, sorghum, winter wheat, vegetables, and cotton. Its nickname is "Land of the yellow earth."

The southern part of the plain is traditionally referred to as the Central Plain (pinyin: Zhōngyuán), which formed the cradle of Chinese civilization.

The plain covers an area of about 409,500 square kilometers (158,100 sq mi), most of which is less than 50 metres (160 ft) above sea level. This flat yellow-soil plain is the main area of sorghum, millet, maize, and cotton production in China. Wheat, sesame seed, and peanuts are also grown here. The plain is one of the most densely populated regions in the world.

Beijing, the national capital, is located on the northeast edge of the plain, with Tianjin, an important industrial city and commercial port, near its northeast coast. Shengli Oil Field in Shandong is an important petroleum base. It is also home to the Yellow River.

All content from Kiddle encyclopedia articles (including the article images and facts) can be freely used under Attribution-ShareAlike license, unless stated otherwise. Cite this article:
North China Plain Facts for Kids. Kiddle Encyclopedia.