Kids Encyclopedia Facts
This article is about the nut. For comic strip, see Peanuts.

A peanut is a herbaceous plant in the legume family, Fabaceae. It is native to South America, Central America and Mexico. Peanuts are annual herbaceous plants growing 30 to 50 cm (1 to 1.5 ft) tall. 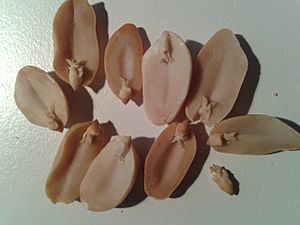 Peanut seeds cut in half showing the embryos with cotyledons and primordial root.

Parts of the peanut include: 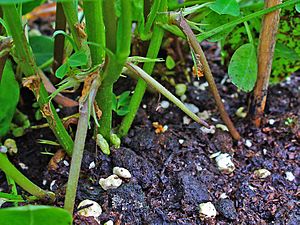 Peanut pegs growing into the soil. The tip of the peg, once buried, swells and develops into a peanut fruit 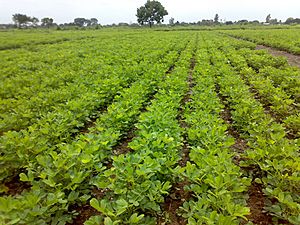 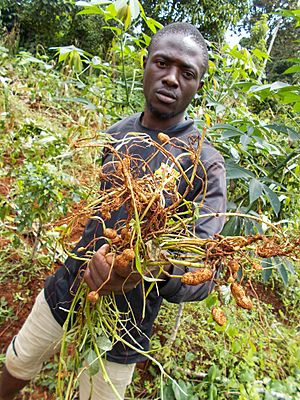 Peanuts grow best in light, sandy loam soil with a pH of 5.9–7. Their capacity to fix nitrogen means that, providing they nodulate properly, peanuts benefit little or not at all from nitrogen-containing fertilizer, and they improve soil fertility. Therefore, they are valuable in crop rotations. Also, the yield of the peanut crop itself is increased in rotations, through reduced diseases, pests and weeds. For instance, in Texas, peanuts in a three-year rotation with corn yield 50% more than nonrotated peanuts. Adequate levels of phosphorus, potassium, calcium, magnesium, and micronutrients are also necessary for good yields. To develop well, peanuts need warm weather throughout the growing season. They can be grown with as little as 350 mm (14 in) of water, but for best yields need at least 500 mm (20 in). Depending on growing conditions and the cultivar of peanut, harvest is usually 90 to 130 days after planting for subspecies A. h. fastigiata types, and 120 to 150 days after planting for subspecies A. h. hypogaea types. Subspecies A. h. hypogaea types yield more, and are usually preferred where the growing seasons are long enough.

Peanut plants continue to produce flowers when pods are developing, therefore even when they are ready for harvest, some pods are immature. The timing of harvest is an important decision to maximize yield. If it is too early, too many pods will be unripe. If too late, the pods will snap off at the stalk, and will remain in the soil. For harvesting, the entire plant, including most of the roots, is removed from the soil. The pods are covered with a network of raised veins and are constricted between seeds.

Harvesting occurs in two stages: In mechanized systems, a machine is used to cut off the main root of the peanut plant by cutting through the soil just below the level of the peanut pods. The machine lifts the "bush" from the ground and shakes it, then inverts the bush, leaving the plant upside down on the ground to keep the peanuts out of the soil. This allows the peanuts to dry slowly to a little less than a third of their original moisture level over a period of three to four days. Traditionally, peanuts were pulled and inverted by hand.

After the peanuts have dried sufficiently, they are threshed, removing the peanut pods from the rest of the bush. It is particularly important that peanuts are dried properly and stored in dry conditions. If they are too high in moisture, or if storage conditions are poor, they may become infected by the mold fungus Aspergillus flavus. Many strains of this fungus release toxic and highly carcinogenic substances called aflatoxins.

Cultivars in the United States

Certain cultivar groups are preferred for particular characteristics, such as differences in flavor, oil content, size, shape, and disease resistance. Most peanuts marketed in the shell are of the Virginia type, along with some Valencias selected for large size and the attractive appearance of the shell. Spanish peanuts are used mostly for peanut candy, salted nuts, and peanut butter.

In 2016, world production of peanuts (reported as groundnuts in shells) was 44 million tonnes, led by China with 38% of the global total followed by India (16%) (table). Other significant producers were Nigeria, the United States, and Sudan. Major exporters in 2013 were India with 541,337 tonnes, which accounts for 32% of world total exports (1.7 million tonnes), and the United States with 19% of total exports. The European Union imported 52% of the world supply of shelled peanuts in 2013, with the Netherlands alone accounting for 40% of the European total.

In the United States, Georgia is the leading peanut-producing state, followed by Texas and Alabama, respectively. About half of all peanuts produced in the US are grown within a 100 mi (160 km) radius of Dothan, Alabama. Dothan is home to the National Peanut Festival established in 1938 and held each fall to honor peanut growers and celebrate the harvest. 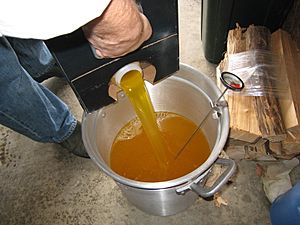 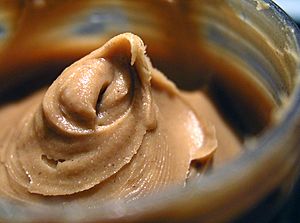 Peanut butter is a food paste or spread made from ground dry roasted peanuts. It often contains additional ingredients that modify the taste or texture, such as salt, sweeteners or emulsifiers. Peanut butter is served as a spread on bread, toast or crackers, and used to make sandwiches (notably the peanut butter and jelly sandwich). It is also used in a number of confections, such as peanut-flavored granola bars or croissants and other pastries. The United States is a leading exporter of peanut butter and itself consumes $800 million of peanut butter annually.

Peanut flour is used as a gluten-free solution.

Boiled peanuts are a popular snack in the southern United States, as well as in India, China, and West Africa. In the US South, boiled peanuts are often prepared in briny water, and sold in street side stands. 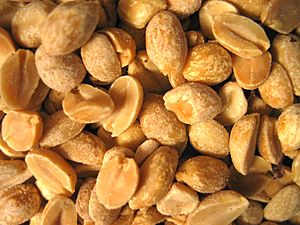 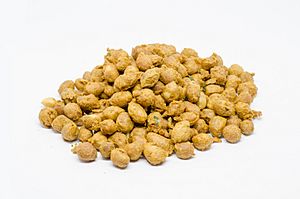 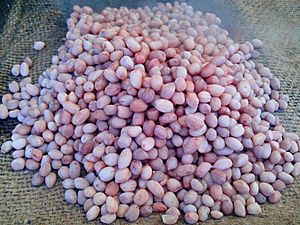 Peanuts are a favorite food, whether eaten alone as a snack food or mixed into candy, cookies, pies, and other bakery products. Peanut butter, made by grinding the roasted seeds, accounts for about one half the peanuts grown in the United States. Worldwide however, peanuts are grown chiefly to provide peanut oil. Farmers in Africa and Asia grow about 90 percent of the world's peanuts.

Peanuts have been cultivated in South America for a very long time. Today most peanuts are eaten roasted and salted. Peanut butter peanut brittle and candy bars are also often eaten. There are two kinds of peanut butter - chunky and creamy. Most American children prefer the chunky kind.

The U.S. introduced the peanut to the tropical South America, and India, China, West Africa, and itself to become the largest commercial producers of peanuts. The peanut was grown mainly for its edible oil, except in the U.S., where it was produced for grinding into peanut butter, for roasted, salted nuts; and for use in candy and bakery products. A small percentage of the U.S. crop is crushed for oil. In the southern U.S. the peanut is used extensively as feed for livestock.

Peanuts are a very good source of monounsaturated fats, the type of fat that is important in the heart-healthy Mediterranean diet. Studies of diets with a special emphasis on peanuts have shown that this little legume is a big ally for a healthy heart.

In addition to their monounsaturated fat content, peanuts feature an array of other nutrients that, in numerous studies, have been shown to promote heart health. Peanuts are good sources of vitamin E, niacin, folate, protein and manganese.

Some people (0.6% of the United States population) report that they experience allergic reactions to peanut exposure; symptoms are specifically severe for this nut, and can range from watery eyes to anaphylactic shock. Eating a small amount of peanut can cause a reaction.

Because of their widespread use in prepared and packaged foods, the avoidance of peanuts can be difficult. The reading of ingredients and warnings on product packaging is necessary to avoid this allergen. Foods that are processed in facilities which also handle peanuts on the same equipment as other foods are required to carry such warnings on their labels.

Avoiding cross contamination with peanuts and peanut products, (along with other severe allergens like shellfish) is a promoted and common practice which chefs and restaurants worldwide are becoming aware of.

All content from Kiddle encyclopedia articles (including the article images and facts) can be freely used under Attribution-ShareAlike license, unless stated otherwise. Cite this article:
Peanut Facts for Kids. Kiddle Encyclopedia.