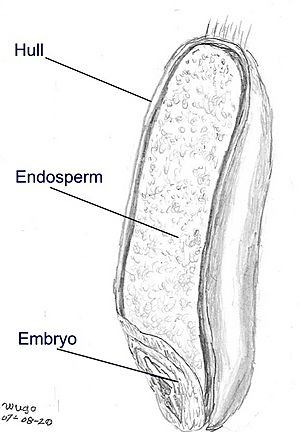 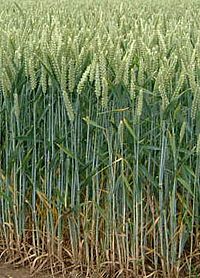 Wheat — a prime source of gluten

Gluten /gloot-en/ is a composite of the proteins gliadin and glutenin. These proteins are found in the endosperms of some grass-like grains such as wheat, rye and barley. Gliadin and glutenin make up about 80% of the protein contained in wheat seed. As they are insoluble in water, they can be got by washing away the starch in the grain. Worldwide, gluten is an important source of food protein, both in foods prepared directly from grains with gluten in them, and as an additive to foods that are low in protein.

Some people are very sensitive to glutens in their food. When they eat foods which contain gluten, these people may experience stomach cramps, bloating, gas and diarrhoea and rashes. This sensitivity is called coeliac disease (in North America, it is usually spelled "celiac disease").

All content from Kiddle encyclopedia articles (including the article images and facts) can be freely used under Attribution-ShareAlike license, unless stated otherwise. Cite this article:
Gluten Facts for Kids. Kiddle Encyclopedia.