Haiti has a tropical climate. In French, the country is called "La Perle des Antilles" (The pearl of the Antilles), because of its natural beauty. There are many mountains in Haiti. The country used to be covered with forests. However, it no longer is, because of deforestation. It is the poorest country in the Western Hemisphere.

Haiti is divided into ten departements. The main religion is Roman Catholicism. However, many Haitians also practice Voodoo. This is a religion which came from African folk beliefs in Benin. Haiti has many holidays; the largest and most important is the Mardi Gras. 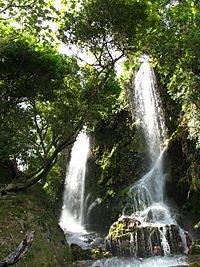 Haiti has a total area of 27,750 km². Most of it is in the western third of the Hispaniola island. There are also smaller islands near the Haitian coast, like Gonâve, Île de la Tortue, Les Cayemites, Île-à-Vache and La Navase.

Haiti has many mountains. There are only some coastal plains and few valleys. The largest valley is the Cul-de-Sac. Port-au-Prince is in the western end of this valley. The country's main river is the Artibonite, which is also the longest in Hispaniola. Haiti's biggest city is Port-au-Prince, with more than 3 million people in its metropolitan area. The second largest city is Cap-Haïtien.

Haiti has a tropical climate. The rainy season lasts from April to June, and from October to November. Hurricanes are common during summer. In the past, hurricanes have caused a lot of damage and killed many people. 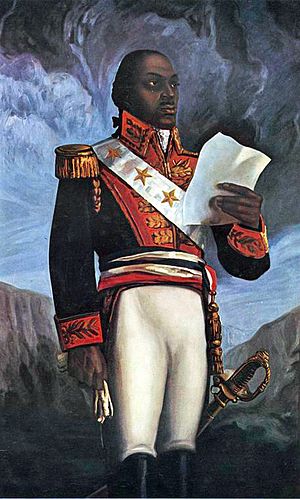 In the early 17th century, the French set up a colony on Hispaniola. In 1697, Spain sold the western third of the island - Haiti - to the French. The French colony was based on forestry and making sugar. It became one of the wealthiest in the Caribbean. However, to do this, the colony brought many enslaved people over from Africa and destroyed much of the environment.

By the late 18th century, there were nearly half a million slaves in Haiti. They revolted, led by Toussaint L'Ouverture. After a hard and bloody struggle, they won their independence. In 1804, Haiti became the first independent black republic in the world. Today there are many monuments in Haiti remembering the Haitian Revolution. One of the largest is La Citadelle Laferriere.

On January 12, 2010, in the afternoon of a Tuesday, Haiti was struck by a magnitude-7.0 earthquake. This was the worst earthquake to hit the country in the past 200 years. The quake's epicenter was just outside the Haitian capital of Port-au-Prince. The quake caused major damage to Port-au-Prince and nearby areas. Over 200,000 people were thought to have been killed, but it was hard to be sure because many people were buried in mass graves before they could be identified. 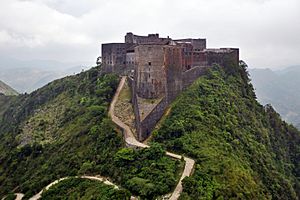 Citadelle Laferrière is the largest fortress in the Americas, and is considered locally to be the eighth wonder of the world.
Main page: Departments of Haiti

Haiti is made of ten regions known as departments (French: départments, singular départment). These departments are further divided into 41 arrondissements, and 133 communes. These are the second and third level units of administration.

The 10 departments, with their capital cities in parentheses, are: 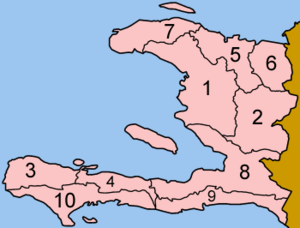 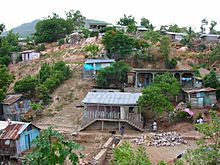 Bas-Ravine, in the northern part of Cap-Haïtien.

Haiti is the world's leading producer of vetiver, a root plant used to make luxury perfumes, essential oils and fragrances, providing for half the world's supply. Half of all Haitians work in the agricultural sector. Haiti relies upon imports for half its food needs and 80% of its rice.

In 2014, the country received 1,250,000 tourists (mostly from cruise ships), and the industry generated US$200 million in 2014. In December 2014, the US State Department issued a travel warning about the country, noting that while thousands of American citizens safely visit Haiti each year, a few foreign tourists had been victims of burglary, predominantly in the Port-au-Prince area.

Several hotels were opened in 2014, including an upscale Best Western Premier, a five-star Royal Oasis hotel by Occidental Hotel and Resorts in Pétion-Ville, a four-star Marriott hotel in the Turgeau area of Port-au-Prince and other new hotel developments in Port-au-Prince, Les Cayes, Cap-Haïtien and Jacmel. Other tourist destinations include Île-à-Vache, Camp-Perrin, Pic Macaya.

The Haitian Carnival has been one of the most popular carnivals in the Caribbean. In 2010, the government decided to stage the event in a different city outside Port-au-Prince every year in an attempt to decentralize the country. The National Carnival – usually held in one of the country's largest cities (i.e., Port-au-Prince, Cap-Haïtien or Les Cayes) – follows the also very popular Jacmel Carnival, which takes place a week earlier in February or March.

In 2009, the population of Haiti (the number of people living in the country) was about 10,090,190. Figures from the DNA Nation-wide Studies Institute say that the racial makeup of the population is:

All content from Kiddle encyclopedia articles (including the article images and facts) can be freely used under Attribution-ShareAlike license, unless stated otherwise. Cite this article:
Haiti Facts for Kids. Kiddle Encyclopedia.