A banana is the common name for a type of fruit and also the name for the herbaceous plants that grow it. These plants belong to the genus Musa. They are native to the tropical region of southeast Asia.

It is thought that bananas were grown for food for the first time in Papua New Guinea. Today, they are cultivated in tropical regions around the world. Most banana plants are grown for their fruits, which botanically are a type of berry. Some are grown as ornamental plants, or for their fibres.

There are about 110 different species of banana. In popular culture and commerce, "banana" usually refers to the soft and sweet kind, also known as dessert bananas. Other kinds, or cultivars, of banana have a firmer, starchier fruit. Those are usually called plantains. Plantains are mostly used for cooking or fibre.

Other than being used as food, beer can be made by fermenting the juice of certain cultivars in Africa, known as beer bananas. The ash of bananas can be used to make soap. In Asia, bananas are often planted to provide shade to plants that like shade, for example coffee, cocoa, nutmeg or black pepper. Because of this, banana plants can often be found in plantations of other crops.

The banana plant is the largest herbaceous flowering plant. Banana plants are often mistaken for trees. Bananas have a false stem (called pseudostem), which is made by the lower part of the leaves. This pseudostem can grow to be two to eight meters tall. Each pseudostem grows from a corm. A pseudostem is able to produce a single bunch of bananas. After fruiting, the pseudostem dies and is replaced. When most bananas are ripe, they turn yellow or, sometimes, red. Unripe bananas are green.

The banana fruits grow from a banana blossom in hanging clusters, also called a bunch or banana stem. The fruits grow in rows called tiers or hands. There can be as many as twenty fruits to a hand, and as many as twenty tiers in a bunch. A bunch usually weighs between 30 and 50 kilograms (65 to 110 pounds).

A single fruit weighs about 125 grams (4.4 ounces) on average; about three quarters of this is water.

Bananas have a lot of vitamin B6, vitamin C, and potassium.

Banana production, as a percentage of the top producer (India). A yellow circle stands for 10%, a red one for 1%. 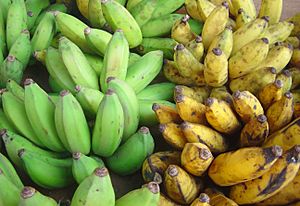 Green and yellow bananas in a market

Bananas are grown in at least 107 countries. The banana species growing in the wild have fruits with many hard, large seeds, but almost all bananas grown to be eaten have seedless fruits. Bananas are classified either as dessert bananas or as green cooking bananas. Almost all export bananas are of the dessert types. Only about ten to fifteen percent of all production is for export. Dessert bananas change their color and usually turn yellow, when they are ripe; plantains and bananas generally used for cooking stay green. Certain bananas have other colors when ripe.

The countries that produce the most bananas include India, Brazil, China, Ecuador and the Philippines. The top five countries that exported bananas were Ecuador, Costa Rica, the Philippines, Colombia and Guatemala. The United States, the European Union and Japan buy the most bananas. Bananas are among the most valuable agricultural export products; They provided about sixty percent of export earnings of Saint Lucia and about twelve percent of the Gross Domestic Product of the country, between 1994 and 1996.

Some people are allergic to bananas. There are two basic forms of these allergies. The first is known as oral allergy syndrome. Within an hour of eating a banana, swelling starts inside the mouth or throat. This allergy is related to allergies caused by pollen, like that of the birch tree. The other is similar to latex allergies. It causes urticaria and potentially serious upper gastrointestinal symptoms.

Other uses of bananas

The fibre gained from the banana plant has been used to make textiles for a long time. In Japan, bananas have been grown to be used for clothing and in the house since at least the 13th century. In the Japanese system, the leaves and shoots are cut from the plant periodically to make sure they are soft. The harvested shoots must first be boiled in lye to prepare the fibres for the making of the yarn. These banana shoots produce fibres of varying degrees of softness. They can be used for yarns and textiles of different qualties, and for specific uses. For example, the outermost fibres of the shoots are the coarsest - they are good for tablecloths. The softest innermost fibres are desirable for kimono and kamishimo. This traditional Japanese banana cloth making process has many steps, all performed by hand.

Another system is used in Nepal. There the trunk of the banana plant is harvested instead. Small pieces of this trunk are then softened. The fibres are extracted mechanically, bleached, and dried. They are then sent to the Kathmandu Valley, where high-end rugs are produced. These rugs have a texture and general qualities similar to that of silk. These banana fibre rugs are woven by traditional Nepalese hand-knotted methods.

What are the benefits of bananas

A medium-sized banana will provide around 320-400 mg of potassium, which meets about 10% of your daily potassium needs. Potassium helps your body maintain a healthy heart and blood pressure. In addition, bananas are low in sodium. The low sodium and high potassium combination helps to control high blood pressure.

All content from Kiddle encyclopedia articles (including the article images and facts) can be freely used under Attribution-ShareAlike license, unless stated otherwise. Cite this article:
Banana Facts for Kids. Kiddle Encyclopedia.