Kerala is a state on the southwestern Malabar Coast of India. It was formed on 1 November 1956, following passage of the States Reorganisation Act, by combining Malayalam-speaking regions. Spread over 38,863 km2 (15,005 sq mi), Kerala is the twenty-second largest Indian state by area. It is bordered by Karnataka to the north and northeast, Tamil Nadu to the east and south, and the Lakshadweep Sea to the west.

With 33,387,677 inhabitants as per the 2011 Census, Kerala is the thirteenth-largest Indian state by population. It is divided into 14 districts with the capital being Thiruvananthapuram. Malayalam is the most widely spoken language and is also the official language of the state. 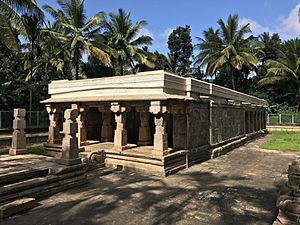 An abandoned Jain temple at Sultan Battery in ruins - Kerala

The Chera Dynasty was the first prominent kingdom based in Kerala. The Ay kingdom in the deep south and the Ezhimala kingdom in the north formed the other kingdoms in the early years of the Common Era (CE or AD). The region had been a prominent spice exporter since 3000 BCE. In the 15th century, the spice trade attracted Portuguese traders to Kerala, and paved the way for European colonisation of India.

At the time of Indian independence movement in the early 20th century, there were two major princely states in Kerala-Travancore State and the Kingdom of Cochin. They united to form the state of Thiru-Kochi in 1949. The Malabar region, in the northern part of Kerala, had been a part of the Madras province of British India, which later became a part of the Madras State post-independence. 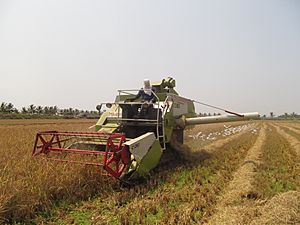 The economy of Kerala is the 12th-largest state economy in India. The production of pepper and natural rubber contributes significantly to the total national output. In the agricultural sector, coconut, tea, coffee, cashew and spices are important. Traditional industries manufacturing items; coir, handlooms, and handicrafts.employ around one million people.

Kerala is one of the prominent tourist destinations of India, with backwaters, hill stations, beaches, Ayurvedic tourism and tropical greenery as its major attractions. 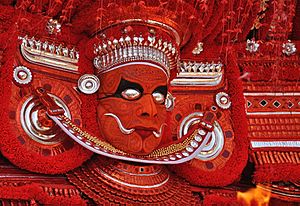 The culture of Kerala is cosmopolitan in nature and it is an integral part of Indian culture. It is a mixture of Aryan and Dravidian cultures, defined by its antiquity and continuity by the Malayali people. It has been elaborated through centuries of contact with neighbouring and overseas cultures. The geographical placement of Kerala from the rest of the country has resulted in the development of a distinctive lifestyle, art, architecture, language, literature and social institutions. Over 10,000 festivals are celebrated in the state every year. The Malayalam calendar, a solar calendar started from 825 CE in Kerala, finds common usage in planning agricultural and religious activities. 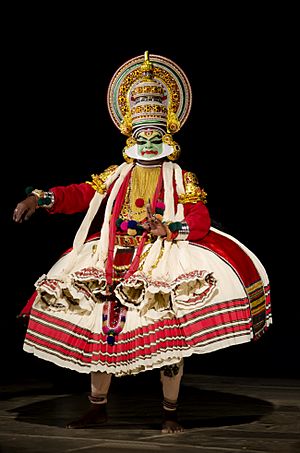 Many of the temples in Kerala hold festivals on specific days of the year. A common characteristic of these festivals is the hoisting of a holy flag which is brought down on the final day of the festival. Some festivals include Poorams, the best known of these being the Thrissur Pooram. Elephants, firework displays and huge crowds are the major attractions of Thrissur Pooram.

Festivals locally known as utsavams are conducted by many temples mostly on annual basis. Temples that can afford it will usually involve at least one richly decorative elephant as part of the festivities. The idol in the temple is taken out on a procession around the countryside atop this elephant. When the procession visits homes around the temple, people will usually present rice, coconuts, and other offerings to it. Processions often include traditional music such as Panchari melam or Panchavadyam. 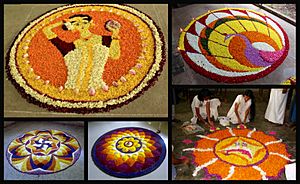 Onam is a harvest festival celebrated by the people of Kerala and is a reminder of the state's agricultural past. It is a local festival of Kerala consisting of a four-day public holidays. Onam falls in the Malayalam month of Chingam (August–September) and marks the commemoration of the Vamana avatara of Vishnu (avatar of Hindu god Vishnu) and the homecoming of King Mahabali (devotee of Lord Vishnu). The total duration of Onam is 10 days and it is celebrated all across Kerala. It is one of the festivals celebrated with many cultural elements. 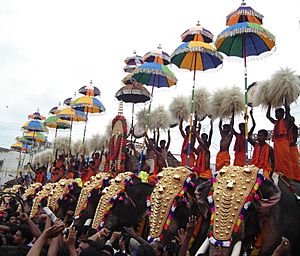 The development of classical music in Kerala is attributed to the contributions it received from the traditional performance arts associated with the temple culture of Kerala. The development of the indigenous classical music form, Sopana Sangeetham, shows the rich contribution that temple culture has made to the arts of Kerala. Carnatic music dominates Keralite traditional music. Kerala's visual arts range from traditional murals to the works of Raja Ravi Varma, the state's most renowned painter. Kerala is home to a number of performance arts. These include five classical dance forms which originated and developed in the temple theatres during the classical period under the backing of royal houses. 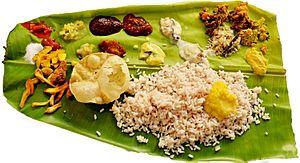 Kerala cuisine has a multitude of both vegetarian and non-vegetarian dishes prepared using fish, poultry, and meat. Culinary spices have been cultivated in Kerala for millennia and they are characteristic of its cuisine. Rice is a dominant staple that is eaten at all times of day. A majority of the breakfast foods in Kerala are made out of rice, in one form or the other. These may be accompanied by chutney, kadala, payasam, payar pappadam, appam, chicken curry, beef fry, egg masala and fish curry.

Lunch dishes include rice and curry along with rasam, pulisherry and sambar. Sadhya is a vegetarian meal, which is served on a banana leaf and followed with a cup of payasam. Popular snacks include banana chips, yam crisps, tapioca chips, unniyappam and kuzhalappam. Seafood specialties include karimeen, prawns, shrimp and other crustacean dishes. 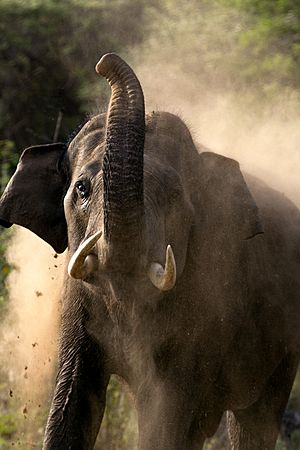 Elephants have been an integral part of the culture of the state. Almost all of the local festivals in kerala include at least one richly decorated elephant. Kerala is home to the largest domesticated population of elephants in India—about 700 Indian elephants, owned by temples as well as individuals. These elephants are mainly employed for the processions and displays associated with festivals celebrated all around the state.

More than 10,000 festivals are celebrated in the state annually and some animal lovers have sometimes raised concerns regarding the overwork of domesticated elephants during them. In Malayalam literature, elephants are referred to as the sons of the sahya. The elephant is the state animal of Kerala and is featured on the emblem of the Government of Kerala.

Most of the biodiversity is concentrated and protected in the Western Ghats. Three quarters of the land area of Kerala was under thick forest up to 18th century. As of 2004[update], over 25% of India's 15,000 plant species are in Kerala. Out of the 4,000 flowering plant species 900 are medicinal, and 159 are threatened.

Altogether, 24% of Kerala is forested. Three of the world's Ramsar Convention listed wetlands—Lake Sasthamkotta, Ashtamudi Lake and the Vembanad-Kol wetlands—are in Kerala, as well as 1455.4 km2 of the vast Nilgiri Biosphere Reserve.

Subjected to extensive clearing for cultivation in the 20th century, much of the remaining forest cover is now protected from clearfelling. Eastern Kerala's windward mountains shelter tropical moist forests and tropical dry forests, which are common in the Western Ghats. The world's oldest teak plantation 'Conolly's Plot' is in Nilambur.

Kerala's fauna are notable for their diversity and includes 118 species of mammals, 500 species of birds, 189 species of freshwater fish, 173 species of reptiles and 151 species of amphibians. These are threatened by extensive habitat destruction, including soil erosion, landslides, salinisation, and resource extraction.

All content from Kiddle encyclopedia articles (including the article images and facts) can be freely used under Attribution-ShareAlike license, unless stated otherwise. Cite this article:
Kerala Facts for Kids. Kiddle Encyclopedia.