Raja Ravi Varma (29 April 1848 – 2 October 1906) was a celebrated Indian Malayali painter and artist. He is considered among the greatest painters in the history of Indian art for a number of aesthetic and broader social reasons.

Firstly, his works are held to be among the best examples of the fusion of European techniques with a purely Indian sensibility. While continuing the tradition and aesthetics of Indian art, his paintings employed the latest European academic art techniques of the day.

Secondly, he was notable for making affordable lithographs of his paintings available to the public, which greatly enhanced his reach and influence as a painter and public figure. 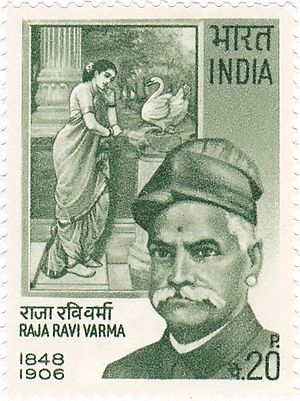 Raja Ravi Varma on a 1971 stamp of India

In 1904, Viceroy Lord Curzon, on behalf of the British King Emperor, bestowed upon Varma the Kaisar-i-Hind Gold Medal. A college dedicated to fine arts was also constituted in his honour at Mavelikara, Kerala. Raja Ravi Varma High at Kilimanoor was named after him and there are many cultural organizations throughout India bearing his name.

In 2013, the crater Varma on Mercury was named in his honor. Considering his vast contribution to Indian art, the Government of Kerala has instituted an award called "Raja Ravi Varma Puraskaram", which is awarded every year to people who show excellence in the field of art and culture.

The following is a list of the prominent works of Ravi Varma.

All content from Kiddle encyclopedia articles (including the article images and facts) can be freely used under Attribution-ShareAlike license, unless stated otherwise. Cite this article:
Raja Ravi Varma Facts for Kids. Kiddle Encyclopedia.