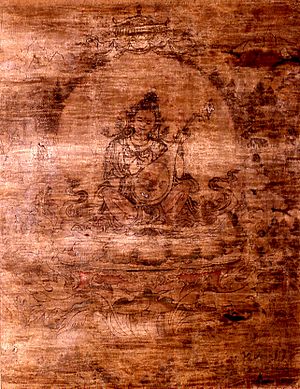 A painting of Saraswati from China. It was made in the 1400s and is painted on silk.

Saraswati is one of the Hindu goddesses. The Vedas also mention her name. She is the goddess of speech, learning and knowledge. The legend states that she created the Sanskrit language and invented the vina, a musical instrument similar to a lute. The legend also says that she is the wife of Brahma, one of the gods of the Hindus.

Saraswati was born from the Samudra Manthan that arranged between the Devatas and the Asuras. She was born from the sea and was married to Lord Brahma thereafter. In another legend, Brahma created her by his imagination. However, she turned out to be so beautiful that he could not takes his eyes off her. Since he had five heads - four in the four cardinal directions - and one on top, his head kept turning in whichever direction Saraswati went.

Saraswati is mentioned in the Vedas, the Brahmans, the Aranyaks, the Upanishads and the Mahabharat. She is dressed in white, carries a book and a lotus. Her favorite instrument is a lute and she rides a swan. Generally, an image or a statue of Saraswati shows her with four arms. Two arms hold the vina. In other arms she holds a book and a lotus flower.

All content from Kiddle encyclopedia articles (including the article images and facts) can be freely used under Attribution-ShareAlike license, unless stated otherwise. Cite this article:
Saraswati Facts for Kids. Kiddle Encyclopedia.