Hindus believe in millions of female gods. Each goddess of the Hindus has her own story and history. They all look different too. Some goddesses can change how they look, so they have two or three different images. Some learned persons think that all Hindu goddesses are different forms of a single big or supreme goddess. Some learned persons also think that worship of goddesses by Hindus shows their respect for female gender.

The Indus Valley Civilization was an old civilization of Ancient India. It lasted from 3000 to 1500BC. Archeologists found some female figures at some places of this civilization. Some persons believe that these figures show the worship of goddess at that time. Some learned persons think that people of that time worshipped a mother goddess. This was similar to worship of a mother goddess in the Mediterranean.

Some important goddesses of Hindus are Lakshmi, Parvati, Sita, Radha, Durga, Kali, Mahadevi, Matrakas, Tara, Chhinnamasta, Mahavidyas, and many more. Some goddesses are also connected with places and rivers.

Durga is one of the most powerful goddesses of Hindus. Hindu scriptures say that Durga came to kill the asuras, that is, the demons. Male gods had failed to control asuras and she was created. She has the powers of all the male gods combined. Mainly Durga is the fighting and most powerful form of Parvati. She is often pictured riding a tiger or a lion.

Saraswati is the goddess of speech and learning. She is the Goddess of science, arts and music. The Vedas tell about her. In her hands, she holds a book, a rosary, a pot of water, and a lute. She is also considered as daughter of Parvati or Durga. Maha Saraswati is the partition form of Parvati`s mahavidya (power of super learning). The mahavidya have two forms. One is maha saraswati and another is neel saraswati. In ancient times, there was also a river named the Saraswati River. The river dried up long ago. This river was also considered a form of this goddess. Saraswati is also the wife of Brahma "god of knowledge, wisdom, and many other things". 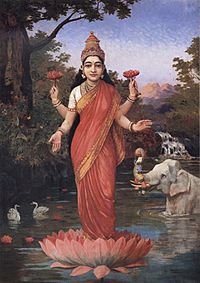 Lakshmi, also called Sri or Sri Lakshmi is an important goddess of Hindus. Lakshmi is the epitome of everything good and prosperous in the world. She as the power behind Lord Vishnu, aids in the preservation of the world. Lakshmi like Vishnu has many incarnation the most important ones being: Sita, Radha and Rukmini.actually Maha laxmi is the partition form of the beauty of parvati or Durga.devi laxmi is also worshipped as goddess of power or cursed free devi.she is worshipes by name of mahalaxmi, dhan ki devi matalaxmi, shree laxmi. she plays an important role on tridevi's place.

After death of Sati, the divine power or Shakti was reformed from the 51 shakti peeth. By this Goddess Sati was reborn as Goddess Parvati. In Sanskrit language, Parvati means a daughter of the mountains, the Himalayas. she again married Shiva. so Goddess Parvati is the 2nd wife of Shiva, one of the three main Hindu gods. She has two son called Ganesh and Kartikeya. She is also called Gauri she has eighteen arms and forty legs.She also have more than 108 names. Durga, Kali, Jagadatri, Bharat Mata (mother India) are the popular forms of the goddess Parvati.

Kali is one of the main goddesses of Hindus. She is a very powerful goddess. Sometimes she is also called Chandi. Durga and Kali killed many asuras (demons) who used to disturb human beings. Kali is a form of Durga that sprang from her head during Durga's battle with the demon Raktabija (who represents the power of thoughts, the power which constantly and unceasingly reproduce in the mind) whose blood when touch to the earth generated another Raktabija. To end this battle between Raktabeeja and Durga, Kali consumed every drop of blood until Raktabija Bled out. Kali is the highest form of the Supreme. Kali's name has two meanings; the first meaning is "dark" which means she represents the Void. The second meaning is "Time" which is the Destroyer of Everything. When Asur and Dev were having samudra madan than halahal came out, shani was who was ready to drink that poison halahal, than Lord Shiva stopped him and said i will drink, when he drank that he was about to die, but mahakali came to save him. and he was saved. If there is death then there is also life.

Sati is a Hindu goddess. She is the 1st form of divine power or Shakti. She was the daughter of Dakshya-raj. She was the 1st wife of Lord Shiva.After death of Sati in the Dakshya-Yagna, Shiva took the deadbody of Sati and started dance. By Sudarshana Chakra Lord Vishnu cut the body parts of Sati. The parts were falled at the 51 places in the Indian subcontinent area. These places are called 51 Shakti peeth. Many forms of shakti like Durga, Kali, Kamakshya, Hingula are being worshiped in these places.

The concept of Goddess Bhuvaneswari as the supreme goddess emerged in historical religious literature as a term to define the powerful and influential nature of female deities in India. Throughout history, goddesses have been portrayed as the mother of the universe, through whose powers the universe is created and destroyed. The gradual changes in belief through time shape the concept of Bhuvaneswari and express how the different Goddesses, though very different in personality, all carry the power of the universe on their shoulders.

Sita is one of the most popular goddesses of Hindus. Hindus of north India especially worship her. She is an avatar of Lakshmi. She was married to Rama, an avatar of Vishnu. Hindu scriptures say that Vishnu and Laxmi are husband and wife.

The word Radha means riches and success. Her name comes with the name of Krishna, another avatar of Vishnu. Some Hindu scriptures describe her as a form or avatar of goddess Lakshmi.

All content from Kiddle encyclopedia articles (including the article images and facts) can be freely used under Attribution-ShareAlike license, unless stated otherwise. Cite this article:
Devi Facts for Kids. Kiddle Encyclopedia.