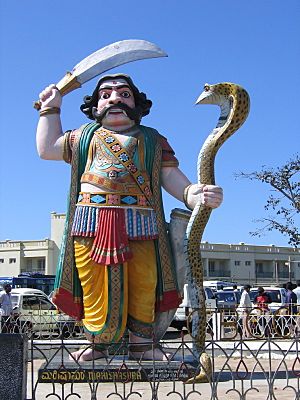 The Asura are a group of supernatural creatures in Hinduism and Buddhism.

In today's beliefs and assumptions, the Asuras are demons. But this was not always that way. The idea of the Asuras is very, very old, from long before the time people learned how to read and write. The Asuras only became demons after much time had passed. Buddhism also has Asuras. These are from Hinduism but have also changed a lot in their own way.

Some of the Asuras are very important, and have been worshiped for thousands of years. The most important of these are Varuna and Mitra. Varuna is the god of the ocean, which in olden times was thought to be flowing under the earth. So, Varuna came to be seen as god of the underworld. In ancient times, water was thought to be where wisdom came from. So Varuna is considered very wise, and he gives his wisdom to those who honor him. Varuna's closest companion is Mitra. Mitra mostly means "friend" in Hinduism, but it originally meant "promise". And so Mitra is the god of friendships and promises. He protects people who honor the truth and punishes those who tell lies. The Mi- in "Mitra" means "to tie tightly". Friendship and promises tie people to one another.

In Hinduism, the Asura (Sanskrit: असुर) are a group of creatures looking for more power, sometimes called demons. They went against the devas. The devas and asuras are the children of Kashyapa.

Hinduism has many stories of Asuras and Devas fighting each other. Mostly they fight about who will get the best prayers from the worshipers.

The Asuras are partly—but not completely -- demonic in Buddhism. Buddhism takes the basic idea from Hinduism.

Mostly the Asuras of Buddhism represent some mental state of humans that is not nice. For example, anger or pride or violence. There are many different kinds of Asuras. They are always angry with everyone and are always fighting. Their leaders are called the Asurendra, which means "Lord of Asuras".

Buddhism is very popular in the far east. So, many of the Asuras also have Japanese, Chinese and Korean names.

The Vedas are the most holy books of the Indian religions, especially of Hinduism. There are four Vedas, and they are all very, very old. The oldest of the Vedas is called the RigVeda, and it is more than 3,000 years old.

In the RigVeda the Asuras are not yet demons. At that time the Asuras and the Devas were both still groups of gods. In fact, many of the figures of the RigVeda are both asuras and daevas. This is because, at that time, the two words were not yet names of groups. They were just names of characteristics. "Asura" means "life", and so the gods who were called asuras were thought to give life. And the daevas were shining. This is the original meaning of the names. In later books they became different.

In the RigVeda many of the devas are called asuras, and many of the asuras are called devas. Sometimes they are also called both at the same time: Like "daevic asuras" or "asuric devas". The "-ic" makes those words a part of the other word. There are some beings who are both ahuric daevas and daevic ahuras. This shows that there was no big difference between 'ahura' and 'daeva' in the RigVeda.

The forefathers of the people who wrote the Vedas spoke Sanskrit. Sanskrit is the source of many Indian languages. The stories in the Rig Veda are seen in the books of various North Indian peoples, and also in the books of some Iranian peoples like the Zoroastrians.

Some time after the RigVeda was written, stories were told about the asuras and devas that made them not friends any more. A similar thing also happened in the Avesta. Only that the two groups had been switched: The Asuras became demons in regions where North Indian languages were spoken, and the Daevas became demons in regions where Iranian languages were spoken.

It is not known for sure why this happened. It was a very, very long time ago.

One possible reason why the Asuras became demons in India is this: Some time after the RigVeda was written Indians started to think that asura means a-sura, which means "not a hero". So, maybe that way the asuras got a bad name.

One possible reason why the Daevas became demons in Iran is this: At about the same time as the Indians were writing the last part of the RigVeda, a very thoughtful man named Zoroaster appeared in Iran. He thought and thought a lot about why there was goodness and badness in the world. Finally, he told everyone what he had been thinking about. And one of those things was that Daevas were not to be trusted because they could not tell the difference between truth and lies. After some time Zoroaster became very popular for his ideas. And so, with time, the Daevas became demons in Iran.

Many, many centuries before the RigVeda and before Zoroaster, a name that sounds like "Asura" was the proper name of a very mighty god. Some scholars say his name was "Ansu" but this is not sure. So that is why they write the name as *Ansu. That '*' means it is not sure. *Ansu was the god of life from which the name 'asura' and 'ahura' comes. We know that this god existed because far, far away in Northern Europe there was also a god named 'Aesir', who was also a giver of life. It sometimes can happen that a similar name appears in two or three places. But it is very rare that the same name with the same function appears. So, that is why 'Asura' and 'Ahura' and 'Aesir' must be all come from '*Ansu'. And we know that such a god must have been very powerful because he was very popular for so very long.

Although the Asuras and the Ahuras are related, they should not be mixed up. This is not only because their names are slightly different. It is also because they are very different. But the most important thing is that they are from different cultures. Even if they came from the same place, that was very long ago. After such a long much time, people have very different ideas about them.

All content from Kiddle encyclopedia articles (including the article images and facts) can be freely used under Attribution-ShareAlike license, unless stated otherwise. Cite this article:
Asura Facts for Kids. Kiddle Encyclopedia.