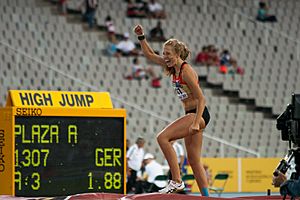 Pride means having a feeling of being good and worthy. The adjective is proud.

The word pride can be used in a good sense as well as in a bad sense.

In a bad sense, pride can mean that someone has an exaggerated sense of feeling good. This might mean that someone has no respect for what other people do, only respect for what he or she does. Someone who is described as proud may be arrogant. The word is used in this sense in the saying: “Pride comes before a fall” or “Pride goes before destruction, a haughty spirit before a fall.” Prov.16:18 (meaning that someone is so overconfident that he or she might soon have a disaster).

All content from Kiddle encyclopedia articles (including the article images and facts) can be freely used under Attribution-ShareAlike license, unless stated otherwise. Cite this article:
Pride Facts for Kids. Kiddle Encyclopedia.