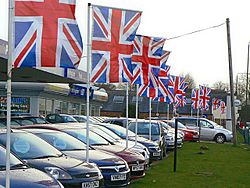 A display of British patriotism with Union Jack flags.

Patriotism means loyalty of person to his/her own nation or the leaders of nation. A patriot is a person who is on the side of his/her own nation or its leaders. Patriotism is different from nationalism. A nationalist thinks that every ethnic group should have its own nation, so nations are to serve the people. In other words, in nationalism the nation is just a tool to have freedom for an ethnic group, while in patriotism the nation itself is the highest value.

All content from Kiddle encyclopedia articles (including the article images and facts) can be freely used under Attribution-ShareAlike license, unless stated otherwise. Cite this article:
Patriotism Facts for Kids. Kiddle Encyclopedia.