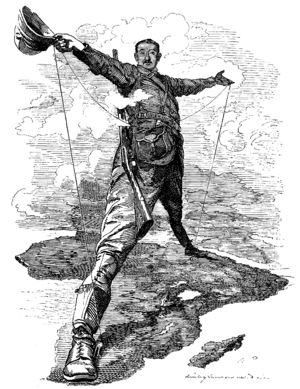 Cecil Rhodes and the Cape-Cairo railway project. Rhodes aimed to "paint the map red" (to show the British Empire).

Imperialism is a policy (way of governing) in which large or powerful countries seek to extend their authority beyond their own borders. The policy of imperialism aims at the creation of an empire.

Imperialist policies of countries or kingdoms have goals of taking over more land to create bigger empires.

The ruler of an empire gains natural resources such as agricultural and mining products. Human resources are also gained. Conquered peoples may be forced into slavery or into low-wage work. They may also be called into military service on behalf of the empire. Trade markets are also gained. The people under an imperial government may be forced to buy products from that government or from that government's industries.

Thus, a policy of imperialism can vastly enrich the imperialist country. This benefit can extend over a long period of time.

Imperialism has been practiced throughout recorded history. However, there is one historical period that is specifically known as the Age of Imperialism. This period extends from the early 18th century to the mid-20th century.

Some writers use the term "imperialism" informally. They use the term to mean any type of domination of one country over another part of the world. Domination especially happened in Asia and Africa.

All content from Kiddle encyclopedia articles (including the article images and facts) can be freely used under Attribution-ShareAlike license, unless stated otherwise. Cite this article:
Imperialism Facts for Kids. Kiddle Encyclopedia.