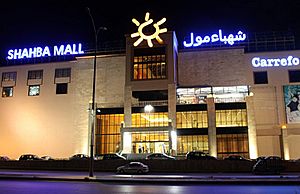 A shopping mall in Aleppo

In 2010 it had an official population of 4.6 million. Then, Aleppo was the largest Syrian city. After 2010, however, Aleppo is probably the second-largest city in Syria after the capital Damascus.

Aleppo is one of the oldest continuously lived in (lived in all the time) cities in the world. People may have arrived in the 6th millennium BC.

There was a large earthquake near Aleppo in 1138.

All content from Kiddle encyclopedia articles (including the article images and facts) can be freely used under Attribution-ShareAlike license, unless stated otherwise. Cite this article:
Aleppo Facts for Kids. Kiddle Encyclopedia.