The quince is a fruit that grows on small trees. It is in the same family as apples and pears. It starts green colored and then ripens to a bright golden yellow color, and looks like a bumpy lemon.

The quince fruit is too hard to eat. It can be cooked to make it soft. Or it can be left out on purpose to rot a little which makes it soft. If it is damaged by frost, that helps start the process of making it soft and good to eat. Quinces are mainly used for making jelly and jam. The interior of a quince is white when it is raw, but it becomes pinkish orange when it is cooked, so that is the color of the jelly or jam when it is made. 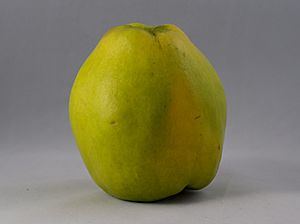 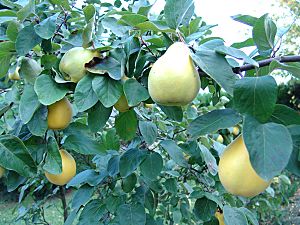 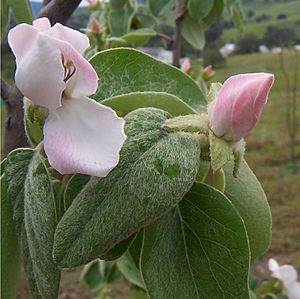 Quince is native to rocky slopes and woodland margins in Western Asia, Armenia, Turkey, Georgia, northern Iran to Afghanistan, although it thrives in a variety of climates and can be grown successfully at latitudes as far north as Scotland. It should not be confused with its relatives, the Chinese quince, Pseudocydonia sinensis, or the flowering quinces of genus Chaenomeles, either of which is sometimes used as a culinary substitute.

Some varieties of quince, such as 'Aromatnaya' and 'Kuganskaya' do not require cooking and can be eaten raw. However, most varieties of quince are too hard, astringent and sour to eat raw unless "bletted" (softened by frost and subsequent decay). High in pectin, they are used to make jam, jelly and quince pudding, or they may be peeled, then roasted, baked or stewed; pectin levels diminish as the fruit ripens. The flesh of the fruit turns red after a long cooking with sugar by formation of anthocyanins. The very strong perfume means they can be added in small quantities to apple pies and jam to enhance the flavor. Adding a diced quince to apple sauce will enhance the taste of the apple sauce with the chunks of relatively firm, tart quince. The term "marmalade", originally meaning a quince jam, derives from marmelo, the Portuguese word for this fruit. 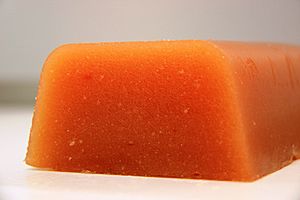 Quince cheese is firm, sticky, sweet reddish hard paste made from the quince fruit, and originating from the Iberian peninsula. It is known as marmelada across the Portuguese-speaking world and as dulce de membrillo across the Spanish-speaking world, where it is used in a variety of recipes, eaten in sandwiches and with cheese, traditionally manchego cheese, or accompanying fresh curds. In Chile, boiled quince is popular in desserts such as the murta con membrillo that combines Chilean guava with quince.

All content from Kiddle encyclopedia articles (including the article images and facts) can be freely used under Attribution-ShareAlike license, unless stated otherwise. Cite this article:
Quince Facts for Kids. Kiddle Encyclopedia.