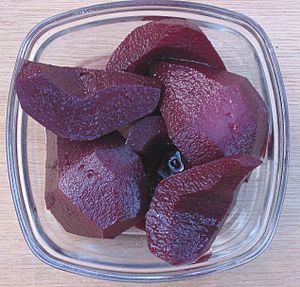 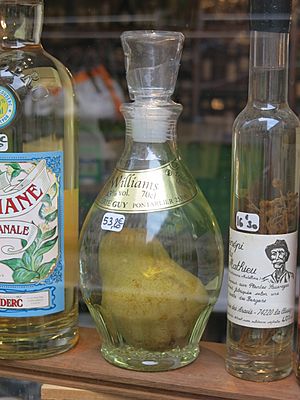 Pear in a bottle of pear Eau de vie 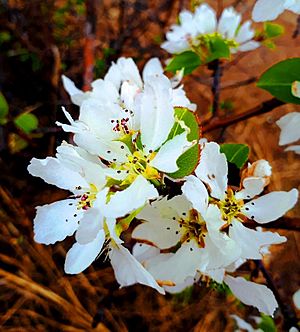 A pear is an edible fruit. Its shape is a teardrop. The flavor of pears is best when they are cool. They are juicy. Pears do not ripen well on trees. They can be soft in the center. They can be baked, canned, frozen, or eaten fresh. They can be made into jams, jellies or juice. They can also be made into pies and put into salads or baby food. They are eighty three percent water. It has a green, red, yellow, or brown skin. The pear originated from Europe, Africa and Asia. Pear trees grow in heavy soil.

Pears are in the subfamily Maloideae with apples. It is a subfamily of the family Rosaceae.

The pear comes from the tree Pyrus communis, also called the common pear tree. The tree can be 10 to 20 metres (33 to 66 feet) high. They live an average of 65 years. It starts as a pyramid-shaped tree. As it grows becomes rounded. It ends up becoming oval. This tree has gray bark covered with cracks. Its leaves are dark green and 10 centimetres (3.9 inches) long. The flowers are pink or white and up to 1.5 centimetres (0.59 inches) long.

The pear needs soil that is neither too dry nor too wet. It grows best in temperate and humid climates.

According to Pear Bureau Northwest, about 3000 known varieties of pears are grown worldwide.

The pear comes from Eastern Europe and Western Asia. It grew during the Neolithic era. Its standard form is the result of different hybridizations from wild specimens.

The pear was also cultivated by the Romans, who ate the fruits raw or cooked, just like apples.

Pears may be stored at room temperature until ripe. Pears are ripe when the flesh around the stem gives to gentle pressure. Ripe pears are optimally stored refrigerated, uncovered in a single layer, where they have a shelf life of 2 to 3 days.

Pears are consumed fresh, canned, as juice, and dried. The juice can also be used in jellies and jams, usually in combination with other fruits, including berries. Fermented pear juice is called perry or pear cider and is made in a way that is similar to how cider is made from apples.

Pears ripen at room temperature. They will ripen faster if placed next to bananas in a fruit bowl. Refrigeration will slow further ripening. Pear Bureau Northwest offers tips on ripening and judging ripeness: Although the skin on Bartlett pears changes from green to yellow as they ripen, most varieties show little color change as they ripen. Because pears ripen from the inside out, the best way to judge ripeness is to "check the neck": apply gentle thumb pressure to the neck or stem end of the pear. If it yields to gentle pressure, then the pear is ripe, sweet, and juicy. If it is firm, leave the pear at room temperature and check daily for ripeness.

The culinary or cooking pear is green but dry and hard, and only edible after several hours of cooking. Two Dutch cultivars are "Gieser Wildeman [nl]" (a sweet variety) and "Saint Remy (pear) [nl]" (slightly sour).

Pear wood is one of the preferred materials in the manufacture of high-quality woodwind instruments and furniture, and was used for making the carved blocks for woodcuts. It is also used for wood carving, and as a firewood to produce aromatic smoke for smoking meat or tobacco. Pear wood is valued for kitchen spoons, scoops and stirrers, as it does not contaminate food with color, flavor or smell, and resists warping and splintering despite repeated soaking and drying cycles.

All content from Kiddle encyclopedia articles (including the article images and facts) can be freely used under Attribution-ShareAlike license, unless stated otherwise. Cite this article:
Pear Facts for Kids. Kiddle Encyclopedia.