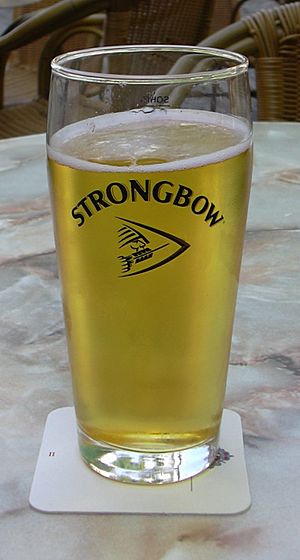 Cider (or cyder) is a drink made from fruit juice, most often from apples.

In Europe and Oceania it is an alcoholic drink that is made from apple juice, through a process called fermentation. In the United States and parts of Canada, cider containing alcohol is called hard cider or alcoholic cider, while cider or apple cider means less-sweet, usually unfiltered, apple juice.

In the United States and Canada people drink a special kind of cider around Halloween and Thanksgiving. This cider is usually unfiltered, rather thick, and it is often heated and spiced with cinnamon before drinking it. This is different from the cider in Europe, which usually is not heated.

How cider is made

Shortly before all the sugar has been fermented away, the cider is put in a new barrel which is made air-tight. The rest of the sugar will then become carbonic acid. This will also add to the life-span of the cider (no pasteurisation is needed).

Cider is also the starting-point for distilling Calvados. This alcoholic drink is famous and very expensive.

Where cider is made

Cider is made almost anywhere where there are cider-apple trees. France is the country in the world that produces the biggest quantity of cider. The United Kingdom produces the most varieties, and along with Ireland holds the biggest market for cider.

Hard cider contains alcohol, which affects the taste of the cider. This can be influenced by choosing the right moment when to stop fermentation:

In France, the most popular are the first, second and fourth categories. In the English-speaking countries, it is possible to find cider with up to 12° of alcohol.

When to drink cider

In Europe, many young people drink cider. Cider costs less than wine, and is often served in pubs and other places where young people go.

The effects of cider are the same as those of any alcoholic drink.

All content from Kiddle encyclopedia articles (including the article images and facts) can be freely used under Attribution-ShareAlike license, unless stated otherwise. Cite this article:
Cider Facts for Kids. Kiddle Encyclopedia.